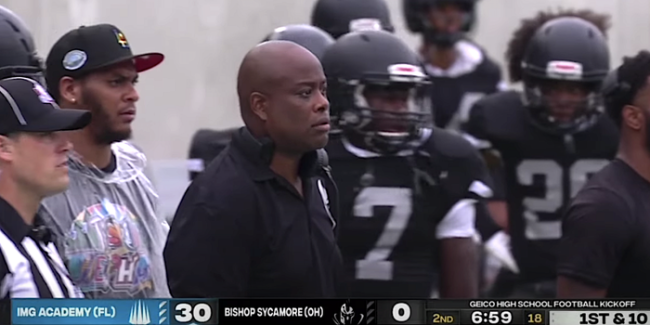 The Bishop Sycamore story keeps getting wilder by the minute.

Last Friday, the online charter school was exposed for potentially being fraudulent after they were caught lying to get on TV when ESPN announcers found many red flags when doing research about them.

The school has since been accused of recruiting overage JUCO players, ordering their players to beat up a homeless man, and stiffing a hotel to the tune of $100k.

Now we’re learning that another hotel claims Bishop Sycamore ripped them off and attempted to pay them with bad checks just this past weekend before their infamous game on ESPN against IMG Academy.

The Columbus-based football program at the center of a growing controversy is now accused of stiffing the Canton hotel where it stayed for its nationally televised GEICO ESPN High School Football Kickoff game.

According to police reports, the hotel reported two invalid checks totaling $3,596. Garren said they were written on an account listed to Education Resources Group of New York, New York.

It really does seem like this story is going to end up becoming the next great Netflix crime doc.