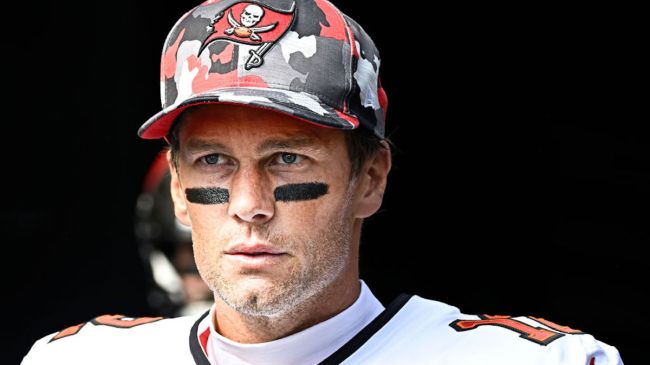 Earlier this week, we brought you the story of an increasingly uneasy-seeming Tom Brady comparing the rigors of an NFL season — in which these athletes are paid millions of dollars to play a game for a living — to “going away on deployment for the military.”

Needless to say, Brady’s comments didn’t necessarily resonate with, well, basically anyone, as the 45-year-old was immediately ripped by virtually everyone for the comparison, including Brad Thomas, an Army veteran who fought in Black Hawk Down.

“I almost look at like a football season like you’re going away on deployment for the military,” Brady said. “And it’s like, ‘Man, here I go again.'”

“The reality is,” he continued, “is you can really only be authentic to yourself. Right? Whatever you may say — ‘Ah, man, I want to, you know, make sure I spend a little more time doing this during the season,’ the reality is, is when it comes down to it, your competitiveness takes over and as much as you want to have this playful balance with the work balance — you’re going to end up doing exactly what you’ve always done, which is why you are who you are.” [via TMZ]

Taking to Instagram, Thomas posted a photoshopped picture on his Stories that showed Tom Brady alongside him while he was serving in Iraq. “Iraq 2003 Colorized” the photo sarcastically reads, which you can find here.

What makes Brady’s comments even more bizarre is that it comes in the wake of all of his reported at-home drama, which means they provide a unique insight into how TB12 has felt about his work-life balance in recent years. Long story short: YIKES.

RELATED: Ben Roethlisberger Believes That Tom Brady ‘Didn’t Look Like He Wanted To Be Out There’ Against The Steelers