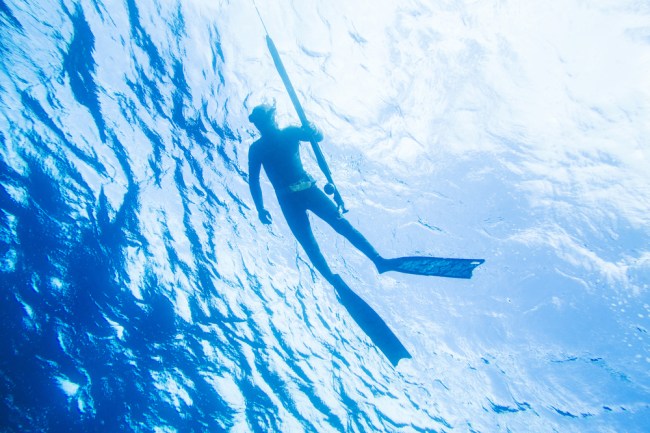 A 28-year-old bro from Western Australia just landed himself an unofficial Black Marlin spearfishing world record and he did so by demolishing the existing world record and Aussie record. Jeremy Telfer was spearfishing off Christmas Island to Western Australia’s north when he bagged a Black Marlin estimated between 250kg to 300kg (550-660+ pounds).

Telfer speared the fish last Sunday on a trip to Christmas Island with some friends. After hitting the massive Black Marlin with a spear the fish then dragged him in the water for a full 2 kilometers (1.2 miles) before he was able to get a handle on the fish and get it back into the boat. Once they got it back on land they took detailed measurements and filleted the fish so they could disperse all of the juicy meat to the island locals. None of the fish went to waste.

The Western Australian caught up with Jeremy Telfer to discuss this unofficial world record. He told them:

“We would have liked to weigh it, we knew it was a world record fish,” he said.
“But it was such a hot day and everything was closed for Chinese New Year, so we didn’t want to wait to weigh it because the fish would have been stuffed and gone to waste.
“I was more concerned about the fish being wasted rather than the record. I only shot it because I knew it was going to get used. There is a large community on the island, we’ve done a lot of trips there and every trip we’ve given so much fish away.
“We had to string it up to a tree using a rope and then reverse the car, just so we could fillet it. Then we had to stand on an esky with two people holding each fillet as it was coming down.” (via)

Anytime an angler takes a record marlin it’s always controversial because conservationists see those fish as breeders with the best genetics, and believe a live fish that can be caught again is always better for tourism. However, it’s completely ordinary to keep billfish in Australia where the fish can be used to feed local island populations for days/weeks.

For more on this world record Black Marlin catch you can click here.