The Twitter Reactions After Blake Bortles Signed With The L.A. Rams Were Absolute Fire 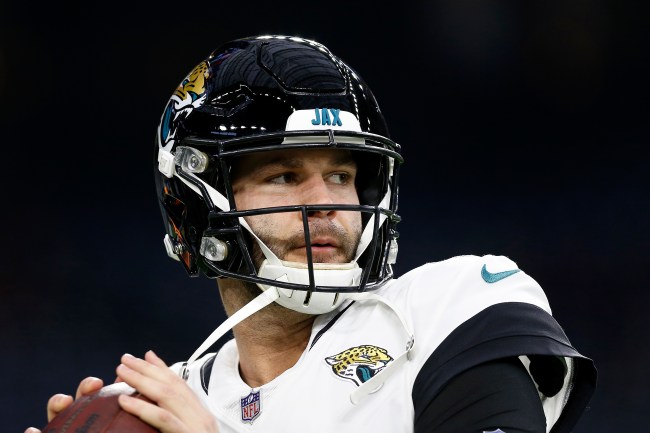 Blake Bortles was the No. 3 overall pick in the 2014 NFL Draft and, believe it or not, once threw 35 touchdowns in a season. Unfortunately, the quarterback couldn’t really maintain nor build off of that minimal success, and was pretty much blamed for holding back the Jacksonville Jaguars’ offense the past few years. Was it fair? Probably not. But, hey, such is the life of an NFL quarterback, right?

After recently being released by the Jags, Bortles found a new team on Monday — the NFC Champion Los Angeles Rams — who agreed to terms with the signal-caller on a one-year deal that’ll make him the backup to Jared Goff. Yep, that’s the same Jared Goff who saw his career go from potential bust as the No. 1 overall pick to a superstar under the guidance of head coach Sean McVay over the past two seasons; could the same be in store for Blake Bortles?

Obviously, Bortles won’t be having as much opportunity as Goff did to show his skills every weekend, but that didn’t stop the Twitter world from at least mentioning it — among other things — once news hit that the Rams signed the former Jags quarterback. Given how inconsistent Blake Bortles has been in his career, Twitter had lots of jokes for the guy, so take a look at some of the best.

@BortlesFacts A live look at Blake Bortles walking into Rams HQ today for his visit knowing that he put up 4 touchdowns in his win over Tom Brady, while Jared Goff only put up 3 points and lost to him. pic.twitter.com/6ycmsGZ7OH

If Nathan Peterman and Blake Bortles can keep finding jobs, there's nothing stopping you from your goals. Keep grinding.

Blake Bortles on the cusp of being the most-popular athlete in Los Angeles.

When Blake shows up in LA pic.twitter.com/Nwri862pik

With Blake Bortles in L.A, we now officially have all the sports stars in one place.

Blake Bortles running wild in Los Angeles as a backup for a Super Bowl contender? pic.twitter.com/yGo7DdTisu

You have to feel for Blake Bortles a little bit seeing as how his career completely flamed out in Jacksonville and was made the scapegoat for the team’s sh*tty 2018 season. Then again, the dude was pathetic last year, only throwing 13 touchdowns and 11 interceptions in his 12 starts, so it’s not as if he really took hold of the starting gig that was handed to him.

Under the tutelage of the wonder boy, Sean McVay, it’ll be interesting to see if Bortles can turn his career around and, potentially, get another chance to start somewhere else down the road. After all, at just 26 years old, the dude should be more than capable — hell, Nathan Peterman started games last season, and one would think a former No. 3 overall pick has more talent than him, right?