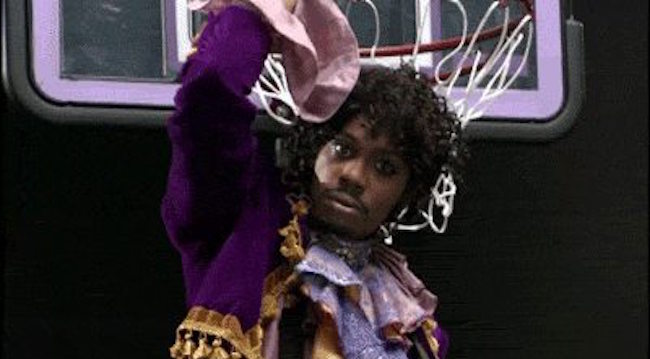 Ever since Blake Griffin dunked over a car, I’ve wondered why his opponents even bother getting in his way instead of letting him do his thing and allowing destiny to take its course. Defending Griffin is like getting way too into yo-yos— it might seem like a good idea, but you’re probably just going to end up making a fool out of yourself.

Last night, Utah Jazz center Rudy Gobert thought he’d try to play some help defense after Griffin blew past his man and began to drive towards the basket. Unfortunately, Rudy Gobert is Rudy Gobert and Blake Griffin is Blake Griffin.

Griffin held onto the rim with one hand for slightly longer than necessary after the drunk to drive the point home— an exclamation point that many people are claiming was a deliberate homage to the Prince sketch from Chappelle’s Show.

The Scully in me want to think this is just a coincidence, but after seeing the two dunks side by side, my inner Mulder is going all in on this theory.

Griffin was asked if he’d purposely imitated Chappelle after the game, and he flashed a smile before delivering an incredibly generic sports answer while being mocked by DeAndre Jordan.

Even if Griffin didn’t do this on purpose, Gobert should probably go purify himself in the waters of Lake Minnetonka anyway.