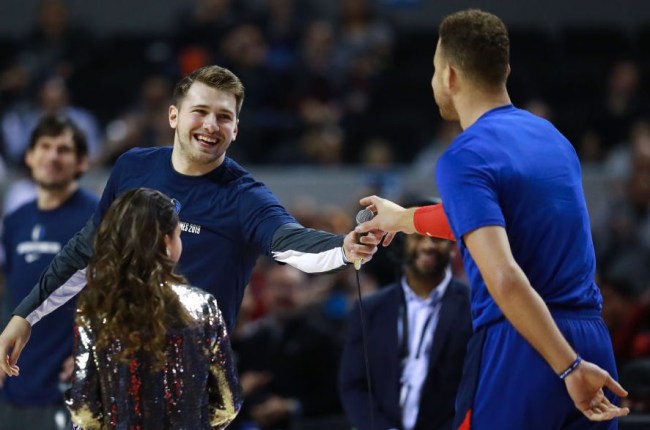 As anyone who’s played NBA 2K in recent years has had pounded into their head courtesy of the game’s repetitive commentary, the league has made great strides to generate interest among international audiences (despite experiencing a bit of a setback after Rockets GM Daryl Morey voiced his support for protestors in Hong Kong).

However, the Chinese market isn’t the only one they’ve attempted to corner, as the NBA has tried to drum of interest among potential Hispanic fans by hosting nights celebrating Latin American culture that feature some fairly low effort jerseys that simply have “Los” or “El” in front of a team’s name.

On Thursday night, the league expanded its efforts by hosting a game between the Mavericks and the Pistons in Mexico City, and prior to the contest, Luka Doncic and Blake Griffin took to the floor to welcome fans to the game.

Doncic—who was born in Slovenia but moved to Madrid as a teenager to develop his game—decided there was no better opportunity to show off his language skills when he delivered a speech to the crowd in Spanish much to the delight of those in attendance, saying (based on a rough translation I came across):

“It’s a pleasure for us to be here. Thank you very much for the reception. I hope you enjoy the game and one more thing: Long Live Mexico!”

Griffin quickly realized he was out of his element and smirked to acknowledge he’d been bested before simply responding with “Hola Mexico!”

Here’s a clip of the exchange.

Before tonight's game in Mexico City, Luka Doncic addressed the crowd in Spanish.

Blake Griffin tried his best to match him 😅 pic.twitter.com/eTqYvU3UhS

Doncic would ultimately gain the upper hand over the course of the game, as he racked up 41 points and tallied a triple-double as he led Dallas to a 122-11 victory, proving that there may be nothing he can’t do.