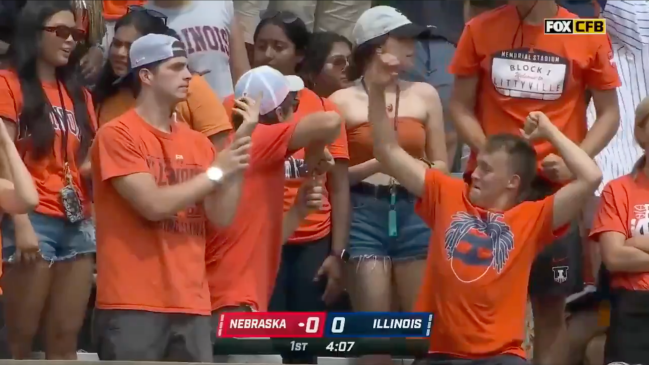 Illinois punter Blake Hayes is the leading candidate for the Heisman Trophy through the first quarter of Week 0. The Illini hosted Nebraska in the first D1 college football game of the 2021 season on Saturday and he was remarkable.

The Cornhuskers began with the ball but couldn’t get anything going and punted. It was the same for Illinois’ offense on its first possession, which meant it was Hayes’ time to shine.

He received the snap on his own 35-yard-line and booted the ball into the corner. Nebraska’s return man tried to field the punt for a moment before realizing that it was a lost cause and abandoning the kick, hoping that it would roll into the end zone.

It did not. Hayes coffin cornered the punt and downed it at the 1-yard-line. It only came five minutes into the season but it might be the punt of the year.

The Cornhuskers could not get anything going on their next possession and punted. It was, again, the same for the Illini.

However, the proceeding punt resulted in the first points of the year. Hayes did it again.

The 2020 Big Ten Punter of the Year from Australia lined up at his own 26 on his second effort. He sent the ball soaring almost 75 yards toward the opposite corner.

Nebraska’s punt returner mistakingly tried to field the kick at the two-yard-line and slipped. Upon further review, the return man was down in his own end zone and the play resulted in a safety.

After official review, the call on the field is confirmed and the first points of the season come on a safety! pic.twitter.com/DUgLifS2h0

It is so good to have college football back and this was a beautiful beginning to the year. Blake Hayes for Heisman!