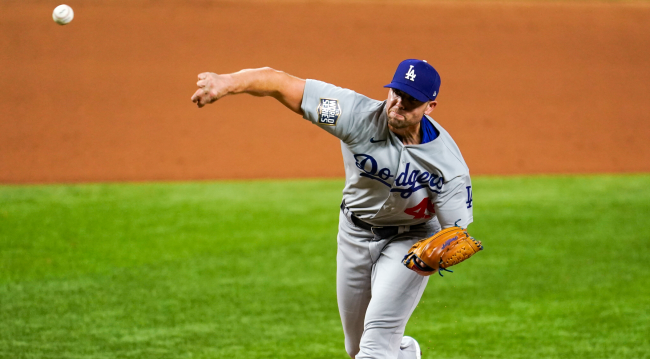 Who’s ready for some baseball? Spring training is over and the Major League Baseball season is finally getting underway and, fingers crossed, each team will actually get to play a full 162 games.

If we get really lucky, we might even actually get to watch some of these games in person inside the stadiums. Dare to dream, I know.

One of the biggest controversies currently swirling around Major League Baseball (isn’t there always some controversy swirling?) has to do with the illegal use of foreign substances by pitchers.

Last week, Major League Baseball announced new rules regarding pitchers doctoring baseballs – something that for several years now has happened so much that it’s almost become the norm.

In a memo issued to all 30 teams, Major League Baseball announcing Rule 6.02c, which includes the following things not being allowed…

(2) expectorate on the ball, either hand or his glove;

(3) rub the ball on his glove, person or clothing;

(4) apply a foreign substance of any kind to the ball;

(5) deface the ball in any manner; or

(6) deliver a ball altered in a manner prescribed by Rule 6.02(c)(2) through (5) or what is called the “shine” ball, “spit” ball, “mud” ball or “emery” ball. The pitcher is allowed to rub the ball between his bare hands.

(7) Have on his person, or in his possession, any foreign substance. Rule 6.02 (c)(7) Comment: The pitcher may not attach anything to either hand, any finger or either wrist (e.g., Band-Aid, tape, Super Glue, bracelet, etc.). The umpire shall determine if such attachment is indeed a foreign substance for the purpose of Rule 6.02(c)(7), but in no case may the pitcher be allowed to pitch with such attachment to his hand, finger or wrist.

If you want to know what many Major League pitchers think of this “crackdown” by MLB, just watch Trevor Bauer’s video below addressing the issue. (Hint: he thinks it’s ill-informed and basically useless.)

Part of the problem with pitchers using these illegal substances has to do with the nasty spin rates they are generating with the baseball.

The mere fact that hitters get hits at all these days against some pitchers is pretty amazing.

One perfect example of the kind of filth Major League Baseball pitchers are now able to toss up to the dish these days came on Wednesday in the form of a 100 mph sinker thrown by Dodgers pitcher Blake Treinen against the Angels’ Jared Walsh.

Somehow, Walsh ended up getting a single in the at bat, which begs the question, why didn’t Treinen just throw that pitch two more times?

Needless to say, fan reaction to seeing a 100 mph sinker – something that really shouldn’t be possible, was a mixture of shock and awe.

Wtf!?! 🤯 I thought 100 MPH sinkers only existed in #MLB #TheShow when I created my own pitcher and rigged him. 🤷🏾‍♂️ https://t.co/rbVogES0wO

The pitch was so good it’s my entire timeline pic.twitter.com/cEcSu35qQl

i'd like all those old-timers who say that pitchers were better in their day to face that.

Would pay good money to hear what this sounds like

I bet it's the sound of giggling at the batter.

Now I am not accusing Treinen of anything here, but, sheesh, how much better can pitchers get before MLB does something like move the mound back five feet to help out the hitters. (Don’t laugh. They’re thinking about doing exactly that.)

Oh, and in case you were wondering…