Blues Goalie Jordan Binnington Threw A Hilarious Tantrum After Being Pulled Vs. Sharks 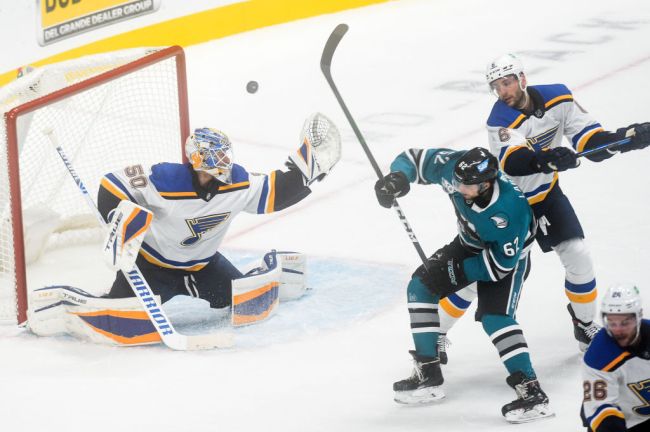 The Saint Louis Blues yanked goaltender Jordan Binnington from Saturday’s game ager he allowed four goals on 19 shots through the first period-and-a-half. He wasn’t happy about it.

There is no room for a backup goalie on the visitors’ bench at the SAP Center, so he had to head to the locker room. On his way off of the ice, the 27-year-old flipped out and threw a tantrum, going after several Sharks players. It was petty, unnecessary and hilarious.

Jordan Binnington woke up on the wrong side of the bed in San Jose this morning pic.twitter.com/gFyfyIwH4r

The full video shows the sequence in its entirety. As he is headed toward his bench, one of his opponents must have let out a chirp that didn’t sit well with Binnington. He turns back toward the San Jose bench and gives Radim Simek a shove. And then he skates past Joachim Blichfield and pops him in the kisser before picking a fight with opposing net-minder Devan Dubnyk. The officials are quick to break it up, robbing us of what could have been an epic goalie fight.

Saint Louis, without any help from Binnington, ended up getting the last laugh and went on to win 7-6. Dubnyk had some thoughts about the tantrum after the game.

“I don’t know why he’s skating around, pretending to punch guys,” Dubnyk said. “I told him to get off the ice, he’s 165 pounds, swinging at guys, fake-punching guys.”

Sharks tough guy Evander Kane scored two goals in the contest, including the one that chased Binnington from net, and had a few thoughts himself.

It was a very comical exit from the game, but it would have been even better if the tendies had dropped their mitts.