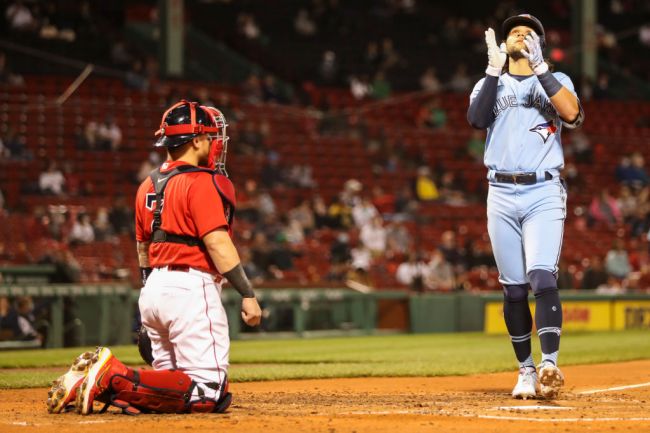 Bo Bichette got ALL of a 0-1 offering from Boston Red Sox pitcher Eduardo Rodriguez on Wednesday night. The 23-year-old is a big part of the Blue Jays’ youthful rebuild and he crushed the pitch at a 40-degree launch angle for a home run. It well beyond the Green Monster in left field and soared all of the way out of Fenway Park.

The dinger itself was a monster shot, but where it landed made it even more incredible. After falling onto Lansdowne Street, the ball came to rest right in front of a building that holds significant value to the Bichette family. The building, currently vacant, used to house the gym where Bo’s parents met for the first time.

Bo’s father Dante, a four-time MLB All-Star, was with the American League Brewers at the time and was in Boston for a series against the Sox. He met his future wife, Mariana, at a Gold’s Gym just steps from where their son’s homer landed.

Bo Bichette’s homer Tuesday left Fenway Park, and landed in front of the now-closed-down gym on Lansdowne St. – the place #Brewers visiting player, Dante first met Bo’s mother, Mariana in the summer of 1991. Thx to @RGriffinTBJ who retrieved the ball for the Bichettes. #BlueJays pic.twitter.com/zGuiZZSIvq

The story of how they met is told in Dante’s Society for American Baseball Research biography as follows. It’s much more interesting than just stumbling into each other mid-lift and Milwaukee’s former hitting coach Don Baylor played a significant role.

Per the SABR: Bichette’s routine while in Boston was to work out at a Gold’s Gym across the street from Fenway Park, just behind the Green Monster. After taking early batting practice before one game, he walked over.

“I walk in, and this girl is walking away from me. And she turns around, and I’m thinking, ‘Wow. I could marry this girl,’ Bichette recalled. “I never said anything to her. I was too scared.”

Bichette walked back to Fenway, where he saw Baylor.

Baylor made Bichette walk back over to the gym and ask Mariana out. They celebrate their 25th wedding anniversary in 2018.

“God bless him. I owe Don Baylor a lot,” said Bichette of his friend and former manager, who died on August 7, 2017. “He was put into my life for a reason.”

There would be no Bo without Don Baylor, a Brewers road trip and a Gold’s Gym across from Fenway Park. His home run was a coincidental homage to that notion and Richard Griffen of the Blue Jays’ media relations team tracked down the ball. The young Toronto shortstop had to sign some autographs to get the ball back, but it was definitely worth the trade off. Aren’t sports just the best?