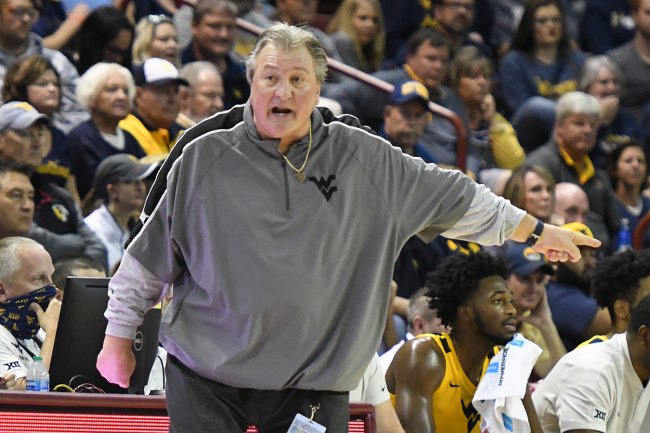 When it comes to perfection, Bob Huggins accepts nothing less. The 15-year head coach of West Virginia basketball made history on Thursday night after his team won by nearly 20 points but could not have been less pleased.

As the Mountaineers faced Elon in the first round of the Shriners Children’s Charleston Classic, everything was clicking, for the most part.

West Virginia went on to win the game 87-68 and Huggy Bear became the fourth-winningest coach in NCAA basketball history.

After the game, Huggins proceeded to tee off on his team for its poor performance.

During his postgame radio appearance, the 68-year-old kicked things off by calling his players out of shape, and lamenting the fact that WVU had to run a press to get a win.

“The intention to start the game was not to full court press,” he said. “I wanted to save as much energy as we could for the next two nights…. we’re not in great shape, yet. I honestly didn’t think we were going to need to. It made ’em play faster, sped ’em up, got them out of their offense. It took them out of what they wanted to do offensively.”

And then Huggins continued, insinuating that there are issues with his team over effort and playing time.

“I’m not trying to make an excuse or blame, but we got fourteen guys and they all want to play,” he said. “You’re going to have a little bit of unrest because they want to play. I understand that. I also understand, too, when I was growing up in the United States of America, you had to work for what ya got. That’s kind of gone now. That’s the way it used to be, and that’s the way it’s going to be as long as I’m the head ball coach here. They’re going to earn their stripes, so to speak. If they don’t like it, go ahead and transfer.”

When the team’s play-by-play announcer tried to bring things back to the positive and talk about the near 20-point win, Huggins wanted none of it.

“It’s not a downer, it’s realistic,” he said. “It’s realism. You can go in there and hug them and kiss them, but they’re going to come out the same way tomorrow. Only thing is, tomorrow, you’re going to go against bigger and better athletes. I’m a realist.”

Huggins’ attitude is why he is the fourth-winningest coach of all-time. He does not settle— not even after a 19-point win early in the season.