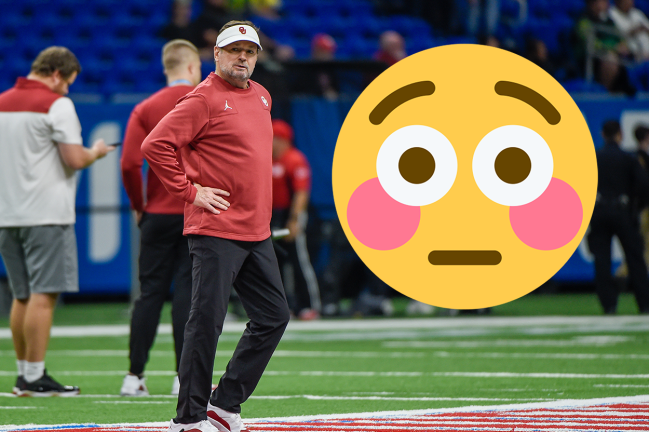 Former Oklahoma football standout Nik Bonitto is not happy with his former teammates transferring out of the program to USC. In particular, he seems to have a problem with the players who once spoke ill of former coaches and are now following them out West.

Bonitto, who played four years with the Sooners, started each of the last three seasons. During the 2021 season, he recorded 39 tackles, seven sacks and a team-high 15 tackles for loss, which earned him All-Big 12 Second Team honors.

He has since declared for the NFL Draft. Bonitto tweeted about his ex-teammates on Saturday and took direct shots at those who are headed to join former OU head coach Lincoln Riley and his staff with the Trojans.

Former Tulane defensive tackle Jeffery Johnson, who recently transferred to Oklahoma, added his two cents on the topic that Bonitto brought to life and did not hold back.

Now, it is unclear exactly who Bonitto is discussing.

A handful of former Oklahoma have transferred to USC after Lincoln Riley left. However, the timing of his tweet came shortly after former Sooners wide receiver Mario Williams committed to play in Los Angeles.

Former five-star quarterback Caleb Williams is also soon to head west. He has been nothing but positive about his experience at Oklahoma, but things could have been different behind-the-scenes.

Former Oklahoma cornerback has yet to decide on his future program after entering the transfer portal. However, he chose to chime in on Bonitto’s comments, perhaps alluding to the fact that it was him that Bonitto was referencing.

Anybody shooting slugs and takin shots can easily hit my number and say what they gotta say. Mf internet thugs 😂😂

And shortly thereafter, in a since-deleted tweet, he took shots at Oklahoma fans in his mentions.

He was getting torched in his replies and deleted it😂 pic.twitter.com/BKshu539Aa

Based on his reaction, and what his father tweeted back in November, it seems to be that Bonitto was discussing McCutchin. Here is what his dad tweeted (and since deleted) in November:

That certainly is not a positive reflection on the staff.

If McCutchin is what caused Bonitto’s tweet, it would make sense.

Oklahoma cornerbacks coach Roy Manning was part of the defensive staff that McCutchin’s father posted about. He is going to coach outside linebackers at USC.

McCutchin was on an official visit to USC during the whole Twitter spat.

Thus, if he commits to play for the Trojans, he is committing to play alongside the staff that his dad (and potentially he) once criticized. That is exactly what Bonitto is talking about, it would seem.

A day after Bonitto took his shot online, former Oklahoma head coach Bob Stoops, who took over in the interim for Riley and coached the Sooners’ bowl game in December, had an interesting reaction. Although it might have been easier for him to stay out of it, he chose to tweet in response to Bonitto’s tweet.