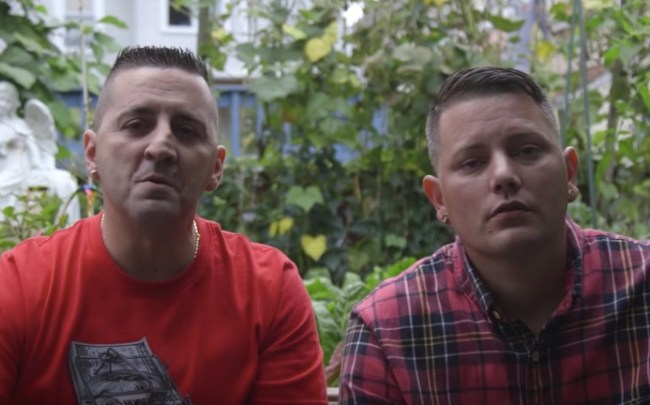 The Boston Red Sox lost their American League East division championship banner earlier this week when it allegedly ‘fell off a truck’ and was found in a ‘paper bag’ by these two dudes from Boston who have gone viral for setting the city of Boston back three decades with their over-the-top stereotypes.

Their plan was to hold the city of Boston hostage try and exchange the lost banner for some playoffs tickets, or really anything they could get their hands on. They wanted something from the team for finding the banner.

The Red Sox have already clinched a spot in the MLB Playoffs with a 103-49 record and a magic number of 2 to win the division. So the banner’s expected to go up at any moment.

Initially, the story was that the Boston Red Sox might have to pay these dudes out to recover their AL East Division banner but that banner was returned to the team after the details of the story become a little fuzzy. Now, the banner has been returned.

According to Iacuzzi, he was driving with friends on the busy road around 7 a.m. Monday when they spotted an object that was forcing cars to swerve.
“I noticed a couple cars swinging, like moving to the right, and we seen something in the street,” Iacuzzi said. “So I ran across the highway to grab it. We brought it in the car; we had no idea what it was.” (via Boston Globe)

The guys claimed they saw it wrapped up in a paper bag, then one dude said he had to run across three lanes of traffic to grab it.

They soon discovered, after removing some wrapping, that it was the 2018 American League East championship banner, Iacuzzi said.
He initially said Wednesday that he and his pals wanted to give the banner to the Sox — but they weren’t going to serve it up like a batting-practice fastball.
“[W]e’re trying to do the right thing, but I’m not just going to hand it to them, know what I mean?” Iacuzzi said. (via Boston Globe)

I don’t want to spoil anything in this video that’s since gone viral. These dudes are the living embodiment of the city of Boston’s most stereotypical qualities.

As my Bostonite colleague Matt remarked: “It is literally impossible to make that video more stereotypical Boston. That gelled up Johnny Unitas (hair)cut brought the city back three decades.”

The silver lining here is that the people of Boston learned you can’t just extort one of your city’s pro sports team because something ‘fell off a truck’. The second these dudes started thinking their needs were more important than the Red Sox Nation is where they went wrong.

The people of Boston are always going to side with the team, and they want to celebrate the Red Sox dominating the AL East this season where the Tampa Bay Rays are 18 games back but would still be winning a division in the National League.

For more on this story, you can click here to see the full article on The Boston Globe.