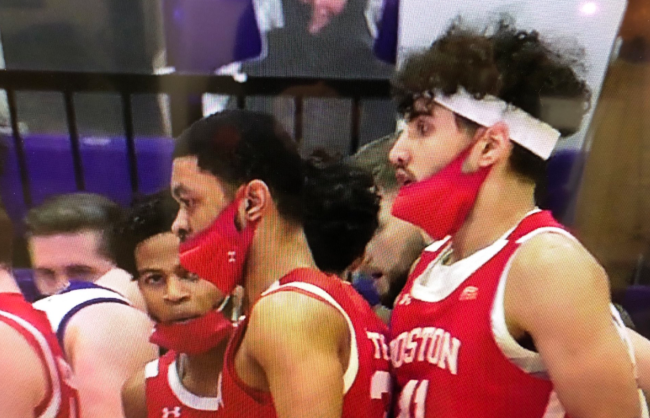 Boston University has mandated that all of its athletic opponents wear masks during games on their campus this season, which includes during basketball games. The Terriers tipped off their season on Monday on the road at Holy Cross but still chose to have its players wear masks during the game.

Maybe the wildest part of this entire situation is that the two teams will play at Boston on Tuesday where they both will be forced to wear masks making it the first known college game with both teams wearing a piece of cloth over their faces. The Patriot League canceled all nonconference games this season, so these two teams are actually scheduled to play each other six times this year.

As you might imagine, the athletes themselves don’t seem to be too thrilled with having to wear masks while on the floor. Some of the players are simply wearing the mask around their ears while others are just covering their mouth. The pictures fall somewhere between sad and somewhat scary, but they’re absolutely absurd no matter which way you look at it.

Watching Boston University’s basketball team play in masks is as weird and dumb as it sounds pic.twitter.com/VW5oatImpo

As I reported, both teams will have to wear masks tomorrow when the two teams play at BU. pic.twitter.com/TIVoIIto9r

Here’s another look at how BU is wearing their masks during today’s game. https://t.co/BfaZ7evukp pic.twitter.com/aK5wbEKmwZ

Boston U has no business being 11.5 point favorites if they gotta hoop in masks pic.twitter.com/sxXYdsOQxt

How many times are they wiping down the ball during the game? Are Boston players told not to touch or defend the Holy Cross players since they’re not wearing masks? If they do have to get close to the opposition, did coaches tell them to hold their breath for extra protection?

Boston appears to be the first program to adopt these mandates, but I doubt it’ll be the last, unfortunately.

UPDATE: Boston went on to win the game 83-76, so maybe the masks didn’t affect them all that much.