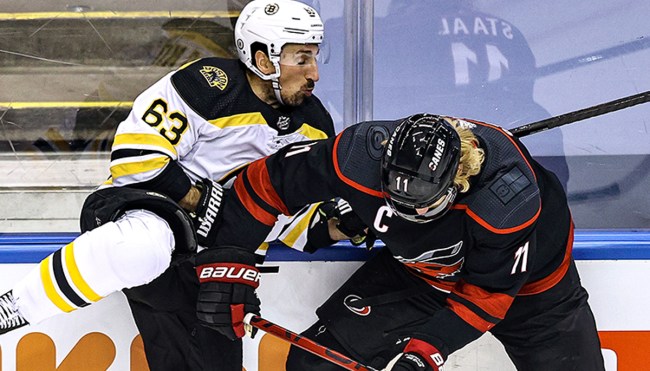 To say Brad Marchand has managed to make plenty of enemies during his time in the NHL is the ultimate understatement, as you won’t find many people outside of Boston who don’t despise the winger with the passion of a thousand suns.

The bulk of the hatred can be traced back to a number of questionable decisions Marchand made early on in his career that earned him a reputation as a dirty player. He has managed to clean up his game a bit over the past few seasons while establishing himself as one of the league’s most formidable skaters, but he remains one of the NHL’s most infuriating pests—a label that he’s been more than happy to lean into.

One of the major reasons Marchy is as effective as he is can be accredited to his ability to get under his opponent’s skin. Even his most avowed haters have to respect his ability to chirp both on and off the ice, and his tendency to let anyone and everyone know how he really feels has now spawned the hottest new beef the NHL has to offer.

Breaking Down The Feud Between Brad Marchand and The Carolina Hurricanes

Prior to Boston’s game against Carolina earlier this week, Hurricanes center Vincent Trocheck responded to a question concerning the similarities between his playing style and Marchand’s by jokingly accusing the outlet who floated it of comparing him to a rat.

Trocheck was asked by @ice_chip if his game and Brad Marchand’s are similar.

“Are you calling me a rat?”

Marchand took exception to that comment in a now-deleted Instagram post where he said comparing him to Trocheck was like “comparing a Lambo to a Prius” along with some receipts he pulled out to highlight his fairly superior offensive prowess.

Caption: “This is like comparing a Lambo to a Prius.” pic.twitter.com/QQ9c1CVs5G

As a result, Tuesday night’s showdown between the Bruins and the Hurricanes featured an extra level of intrigue. Unfortunately for Marchand, the Hurricanes were able to get the last laugh, as the Bunch of Jerks netted five goals in the opening period in a game where also Trocheck delivered a sizeable hit on his new foe en route to a 7-1 victory.

Never seen a Prius total a Lambo before pic.twitter.com/NJ2uQY0raq

After the contest, Carolina’s social media team delivered a chirp of its own while commemorating the victory, but Marchand fired back in a fantastic attempt to save face.

You’re still the reason we pay 20% in escrow

For the uninitiated, Marchand was referencing a section of the collective bargaining agreement that requires players to fork over a chunk of their salary (the current number is actually 17.2%) to supplement losses the league suffers thanks to unprofitable teams like the Hurricanes (this is an admittedly simplified explanation of the issue at hand, but a number of Reddit users provided a more in-depth breakdown).

The Hurricanes attempted to issue a response, but the consensus seems to be they took the L on this one.

Boston will get a shot at redemption when they face off against Carolina again on February 10th, and that day cannot come soon enough.