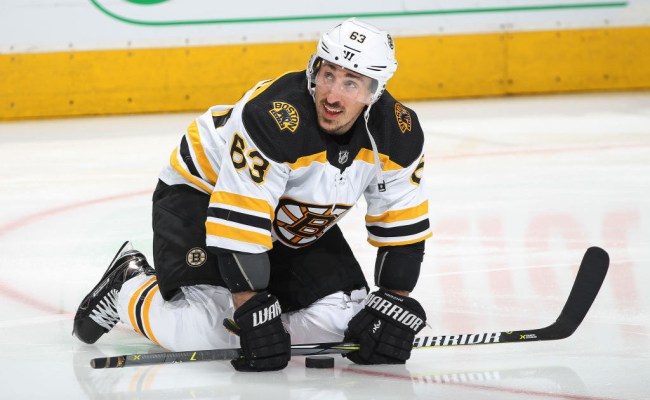 Even if you’ve never played a sport, there’s a very good chance you know someone like Boston Bruins forward Brad Marchand. If you’re not familiar with his approach to hockey, he’s basically one of those guys that can’t go to a bar without picking a fight with someone but does so knowing he has his own crew— including a 6′ 9″ buddy— to take care of the dirty works while he quickly slinks away.

The antagonistically squirrelly winger frequently toes the line between cheeky and dirty and has earned a reputation for being one of those players everyone hates but would absolutely love to have on their team. As a Bruins fan, I’m the first person to acknowledge that he’s an objective asshole on the ice, but it’s impossible not to be entertained by some of his antics on the ice.

During the first game of Boston’s amazingly intense series against the Maple Leafs, Marchand pulled out a fairly unconventional strategy when it came to getting into the head of his opponents after he got tied up with Leo Komarov and appeared to lick him when the two got a little too close for comfort (Marchand’s explanation was that he thought Komarov “wanted to cuddle” and responded by getting halfway down the first base line).

How many licks does it take to get to the center of a Maple Leaf? #StanleyCup pic.twitter.com/UFO1UFVO7Y

The Bruins will face off against the Tampa Bay Lightning when their second-round series kicks off tomorrow, but it probably won’t feature any more licking on Marchand’s part after the NHL reportedly had to ask him not to lick any more players. I’m sure rules officials are glad to have a glimpse into what it’s like to be in charge of running a preschool.