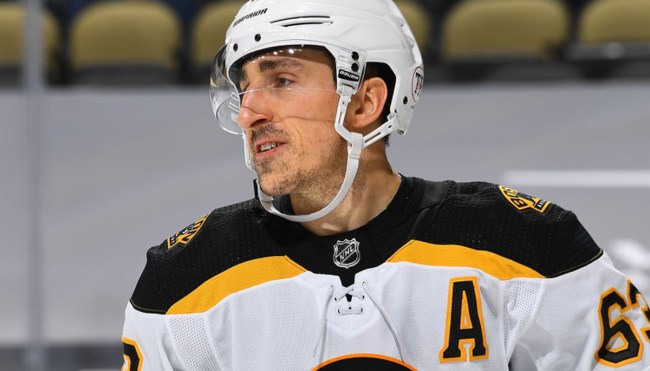 If you’re at least casually acquainted with professional wrestling, then you’re probably familiar with the concept of a “heel turn,” which occurs when a personality who’s been marketed as a villain undergoes a reinvention that leads to them being embraced by fans.

Those about-faces are typically the result of a carefully calculated behind-the-scenes decision, but there are also plenty of people who play a “real” sport who’ve traveled down a similar path to redemption thanks to a certain moment (or, more often, a series of them) that makes fans who once despise them think, “Wait, do I actually like this person now?”

That’s the question basically anyone who doesn’t root for the Boston Bruins has recently found themself pondering courtesy of the one and only Brad Marchand, the infamous pest who seemed like one of the least likely candidates for this particular treatment based on his long, long history of antagonistic behavior on the ice.

Marchy garnered a ton of praise earlier this week thanks to a couple of hilarious chirps he delivered during a blossoming feud with the Carolina Hurricanes, and on Thursday night, The Rat King cheesed it up after grabbing a phone out of the hand of a young Bruins fan while leaving the ice following the pregame skate before recording an awesome message.

Young Bruins fan Aiden Smith was treated to a pretty awesome surprise from @Bmarch63 before Thursday’s game against the Capitals. @NESN pic.twitter.com/VfIZz9kWzQ

After the video made the rounds, a number of avowed Marchand Haters chimed in to give credit where credit is due.

I hate this man but this is pretty cool!

I hate this man but this is pretty cool!

I hate when he is playing against the Leafs but their is no doubt he is hilarious and great character. The #NHL have to take advantage of these guys in the league and promote the stars better

I’m really starting to hate to love him.

This is awesome!! hate the player. Love the guy though. 😂🤣

Unfortunately, Marchand did not have a lot of fun when everything was said and done, as he was knocked out of the game following a hit that injured his shoulder (Thursday night was a particularly confusing one for NHL fans, as the notoriously dirty Tom Wilson drew praise across the board for delivering a devastatingly clean check on Anton Blidh early in the contest).

Here’s another look at Garnet Hathaway’s cheap shot on Brad Marchand (who has left the game with an upper body injury):

Here’s to hoping he makes a speedy recovery.