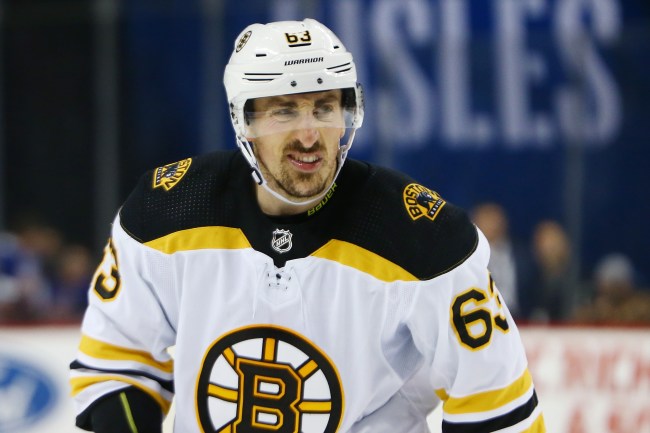 I thought good and hard about the headline for this article and whether it was hyperbole. On the one hand, who am I to say what the most embarrassing moments of Brad Marchand‘s career are? The Rat has been slapped on the wrist for repeatedly licking players on opposing NHL teams. That has to sting, doesn’t it? But on the other hand, holy shit, this play…

The Boston Bruins lost to Flyers (in Philly) in a pathetic shootout. The Bruins were leading 5-4 going into the 3rd period but the Flyers tied it up and neither team scored in the 3-on-3 OT so the game was pushed to a shootout where the Bruins went 0-5 and the Flyers went 1-5.

Brad Marchand is 6th in the NHL right now in Points (63) with 20 goals and 43 assists (19 +/-). He’s a really fucking good hockey player and it really pains me to admit that as a Tampa Bay Lightning fan but it’s undeniable. He had the opportunity to keep the shootout going but he looked like an 8-year-old who just put on skates for his first time.

Marchand picked up a ton of speed approaching the puck, barely grazed the puck with his stick, and skated right on past. This registered as an official ‘attempt’ and boom, the game was over as Marchand looked on completely dumbfounded.

Bruins lose after Brad Marchand has the worst shootout try in the history of the sport pic.twitter.com/x9IVt4eDgG

I wasn’t watching the game in real-time because the College Football National Championship was on but I saw ‘Marchand’ was trending on Twitter almost immediately and I died when I saw the clip. It’s just so fucking good. Here are some of the best Twitter reactions:

Put this Marchand clip in The Louvre pic.twitter.com/B2G3NglA6m

Brad Marchand Whiffs In The Shootout, But It’s Always Sunny In Philadelphia. pic.twitter.com/QQPKXPoHb4

*me in a rocking chair*

2020 was barely weeks old, the small man with the large proboscis skated toward the puck like an angry gnat. As he tried to make contact w/ the disk he missed like an ill-fated space probe

Child: dad are u talking about Marchand last night? I saw the gif

The Flyers coming off the ice after Marchand whiffed in the shootout.

“His nose got in the way” 🤣pic.twitter.com/ZJHpDNJyL2

This is your king????? Brad Marchand looking like he just threw on skates for the first time in his life. Big yikes pic.twitter.com/kIbzU1T06N

*Travis Konecny scores in the shootout*

Marchand: Hope I don’t blow this.

IT'S OVER! Marchand over skated! #BOSvsPHI

It’s hard to pinpoint a single moment in NHL history where I can honestly say that I could’ve done a better job than the pros but this is legitimately a moment where I could’ve been of more use to the Bruins than Brad Marchand was.

The Bruins are still leading the Atlantic with 66 points. Their +34 goal differential is 2 goals better than Tampa Bay who has been surging recently (10-1 in their last 11). The Bruins have seen a league-leading 12 overtime appearances which is asinine compared to the rest of the league. The next closest team has 8 OTs but most teams are hovering around 4-6 OT appearances so far.

Only the Capitals and the Blues have more points (67) than the Bruins (66) so they’re doing JUST FINE despite Brad Marchand’s career low moment last night.