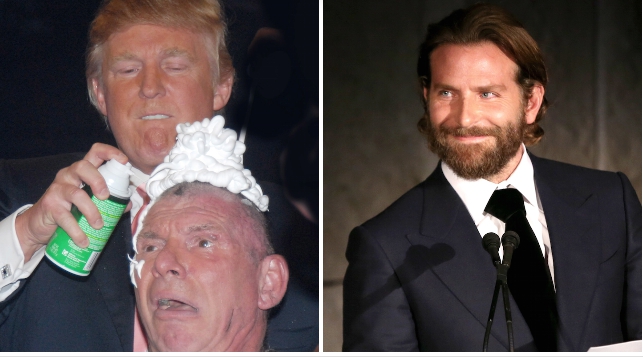 Imagine Vince McMahon at the head of the table at WWE Studios while producers and casting directors throw him names of several Hollywood actors to play him in an upcoming biopic. I’d guess they’d start realistic: Nick Nolte. Gary Busey. Nicolas Cage. ‘Not sexy enough,’ McMahon would say, probably. After hours of deliberation, intern Billy would throw out a name like Steve Buscemi, which would cause Vince to snap, body slam Billy through a table and yell ‘BRADLEY COOPER OR NO ONE!’

Well, I choose to believe that exact sequence of events actually happened, and I’m probably not too far off. According to Digital Spy, Bradley Cooper has been offered the role of Vince McMahon in the upcoming biopic titled Pandemonium. The film, which is being spearheaded by WWE Studios and TriStar. documents the rise of the WWE CEO and was written by Craig A Williams back in 2015.

But, according to reports, the script has undergone countless rewrites due to WWE Studios coming onboard and demanding certain aspects of the script be omitted because the McMahon family were not happy with them.

Just judging by Cooper’s workload at the moment, it is unlikely the 42-year-old will accept the role. He currently has his paws in four projects: Deeper, Atlantic Wall, Avengers: Infinity War, and A Star Is Born — which will be his directorial debut.

This film is set to be directed by John Requa and Glenn Ficarra, writers of Bad Santa.

Pandemonium could either be the best biopic in a long time or, if the McMahon family dilutes the content to paint them in a favorable light, it could amount to no more than an hour and a half WWE marketing ad. I’m hoping for the former.