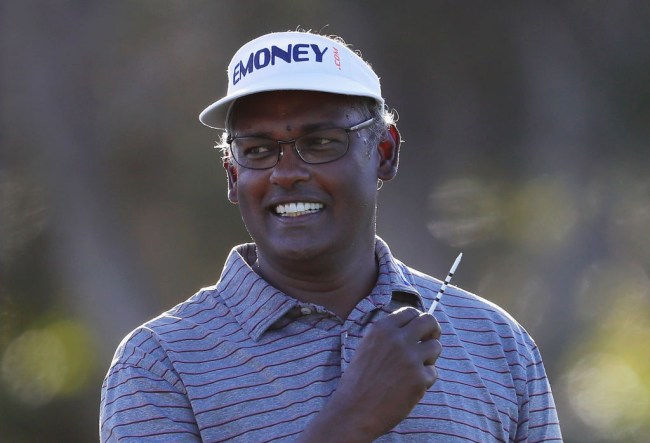 Vijay Singh is a 34-time PGA Tour champion, a three-time major champion, and a four-time PGA Tour Champions winner. The 57-year-old is also fourth on the all-time money list earning over $71 million throughout his career. So, when it was reported that he’d be teeing it up in an upcoming Korn Ferry Tour event it was a head-scratcher, to say the least.

Nobody, and I mean nobody, was more upset about the news than Korn Ferry Tour member Brady Schnell.

Schnell, currently ranked No. 913 in the world, hopped on Twitter and blasted Singh for entering the Korn Ferry event calling him a “true piece of trash” if he ends up making the cut and accepting money from the event. Schnell doesn’t like the fact that a player of Singh’s status is entering an event and taking an opportunity away from another up and coming player to earn valuable points and a paycheck.

“Hey @VijaySinghGolf you are a true piece of trash if you except (sic) money playing in a Korn Ferry Tour event and I’ll say it right to your face,” Schnell wrote in a Tweet that he later deleted.

He later walked his comments back in another since-deleted tweet.

“Piece of trash is way too harsh. This is why, including myself, we should all breathe a little before posting something. I reacted too strongly when I heard Vijay was playing in a KF event, however, I feel strongly he shouldn’t play. Its a silly move on his part, period!”

It’s an interesting dilemma, that you may or may not care about, because, on the one hand, you can absolutely see where Schnell is coming from. Singh doesn’t need the money and he is possibly taking away a chance for another young player to earn a living and keep the PGA Tour dream alive.

On the other hand, Singh has earned his right to enter the event and that absolutely counts for something.

He has a lifetime membership on the PGA Tour, which is achieved by winning 20 events, meaning he’s guaranteed a certain amount of starts on the Tour each year. However, that doesn’t mean he can just pick and choose events such as the Charles Schwab Challenge, the first Tour event since the sports world hit pause. Singh won’t make it into that event thanks to practically every Tour player entering the tournament plus the PGA Tour Champions isn’t returning anytime soon, therefore, he’s electing to tee it up with the young guys.

Again, he’s earned that rite thanks to a little thing called winning, and winning a lot.

Is it maybe not the best of looks for Singh to play in the event? Sure, I’ll give you that, but the PGA Tour is the one with the lifetime membership rule and Singh is simply taking advantage of it.

Singh, like every other professional golfer on the planet, is ready to get the competitive juices flowing again, and playing in a Korn Ferry Tour event just so happens to be his only way of doing that.