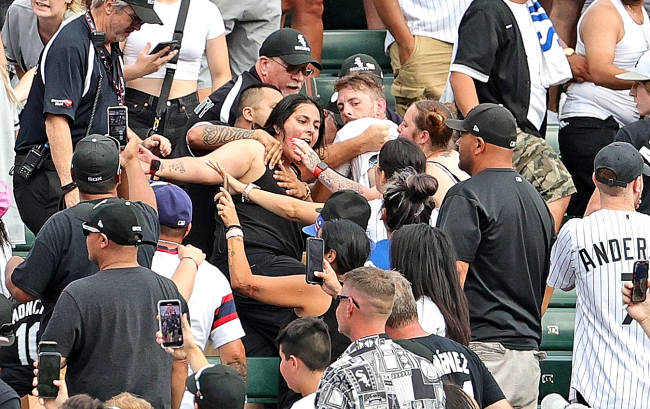 The Chicago White Sox and the Chicago Cubs are headed in completely opposite directions so when the South Siders destroyed the North Siders in the three game crosstown series over the weekend tensions got high.

Fans of the two Windy City teams already aren’t very fond of one another, but with the White Sox drubbing the fuzzy Cubbies by a score of 13 to 1 on Sunday, things escalated to a new level of animosity and resulted in a wild brawl in the stands.

The rubber match of the series, the White Sox won game one 17-13 and the Cubs won game two 7-0, got ugly when the Sox scored a whopping 7 runs in the fifth inning, both on the field as well as in the bleachers.

Related: Security Is Nowhere To Be Found While Padres Fans Get In Vicious Brawl In The Stands

Naturally, the brawl was captured for posterity by numerous fans, at numerous angles, during the game with their phone cameras.

Finally the fight we were looking for at Sox/Cubs pic.twitter.com/FBIeFn1OSP

One person was kind enough to explain what happened to escalate things to this level.

One shorty was tryna start the wave. We all told her no, someone threw a beer at her and the rest is history Lmaooo

Here’s one more angle of the Sox-Cubs fan melee in the stands because why not?

The White Sox ended up taking five out of six games from the Cubs this year and currently sit in first place, 10 games up on the Cleveland Indians, in the American League Central with a record of 76-56. The Cubs, at 57-75, are 23 games back of the Milwaukee Brewers in the National League Central.