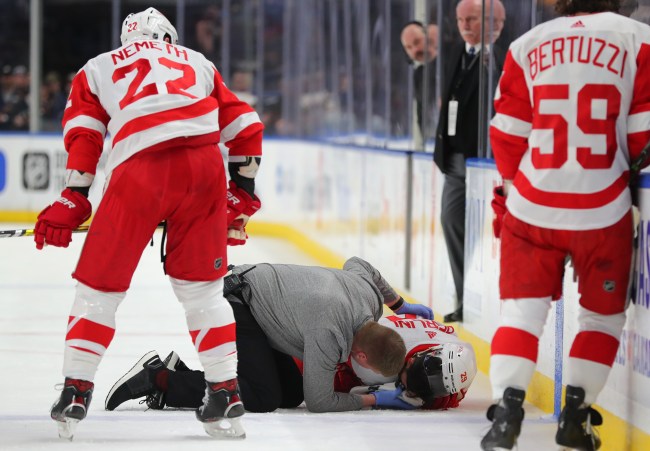 Last night was a wild one in the NHL. Elsewhere, St. Louis Blues defenseman Jay Bouwmeester was rushed to the hospital after suffering a cardiac event (he’s now conscious and alert). And in Buffalo, Detroit Red Wings left winger Brendan Perlini took a skate to his face that slashed across his nose and close to his eyes that immediately caused a horrific-looking injury that stopped the game.

Perlini left the ice bleeding and did not return to the game but he’s since been cleared to travel after his face was sewn back together using stitches. According to Freep, Perlini left the arena without giving interviews because he wasn’t feeling well enough but his overall sense of well-being was a major relief to his teammates who feared the worst.

“It looked terrible,” Anthony Mantha said. “We kind of saw it coming, like slow motion on the ice. It’s scary.”

This atypical hockey injury looked awful in real-time. You can see it in this clip around the twenty-second mark:

Brendan Perlini takes a skate to the face from Henri Jokiharju. Ended up skating off slowly with a towel held against his face. #LGRW #Sabres50 pic.twitter.com/C4ltP607Ey

Jesus you hate to see this. Injuries are bad enough but when a skate is involved.
Reminds me of when Richard Zednik and Clint Malarchuk had 2 of the worst injuries I’ve ever seen in any sport.
Look them up on YouTube and see for yourself. Please be advised, extremely graphic https://t.co/3ezBmj0HJj

It’s one of those injuries that you can immediately tell something awful has happened but thankfully he made it out of there with stitches and not the loss of a large portion of his face (or worse).

Here’s what he looked like after the bleeding stopped:

In the aftermath of the injury, Freep was able to speak with the couch and it sounds like Perlini is traveling with the team on their road trip after receiving medical treatment:

“I just talked to Brendan,” coach Jeff Blashill said after the game. “Brendan is doing good. It cut him underneath the eye and around the nose. It was a large laceration. I think he was thankful, I was thankful. We were all scared when we first saw it happen that it had gone near his eye. That’s the thing you worry the most about.

“It was just an unfortunate situation where the skate came up and he was falling and it caught him in the face. Super scary. At that point both teams just worry about his well-being. Thankfully he is going to be all right.”

Blashill said Perlini would travel with the team to New Jersey, where they play Thursday. He did not have information yet on whether Perlini will miss any games. He just scored his first goal of the season in Sunday’s 3-1 victory over the Boston Bruins. (via Freep)

It’s a bummer to see a guy who just scored his first goal for the Red Wings potentially sidelined with an injury like this. Especially considering how badly Detroit can use goals. They’re currently in last place in the Eastern Wild Card hunt with only 14 wins on the season and a -96 goal differential.