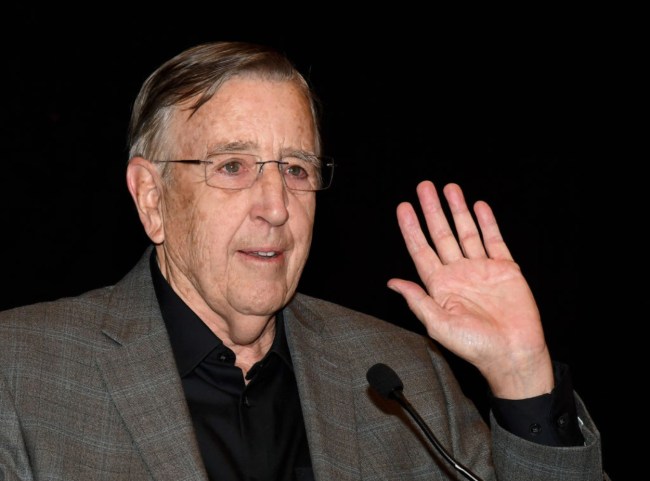 Gruden resigned as the head coach of the Raiders in October after a bombshell report out of the New York Times revealed that he used homophobic, racist, and misogynistic language in emails.

The emails were discovered as part of a federal investigation into former Washington Football Team trainer Ryan Vermillion. That part of the scenario doesn’t add up for Brent Musburger.

Musburger, who is the voice of the Raiders on the radio, recently shared his thoughts about Gruden’s exit on the Las Vegas Sports Network. He thinks it was a professional hit job.

“As I told Coach, whoever took you out, Jon, that was a paid assassin,” Musburger explained.

“That was one of the best hit jobs that I’ve ever been around. They didn’t go to their media goombahs. They didn’t leak this to Adam Schefter or one of those guys that breaks stories. They first went to the Wall Street Journal. And when Gruden was still coaching after that, then they dumped the rest of it on the New York Times. That was a professional hit job.”

Musburger isn’t the only person out there that believes the situation around Gruden’s exit smells a bit fishy, but he is one of a very small group of people to come out and say the quiet part out loud, so to speak.

In November, Gruden officially filed a lawsuit accusing both the NFL and commissioner Roger Goodell of deliberately attempting to destroy his career by leaking the emails.

The 21-page complaint in the lawsuit says that Gruden was “forced to resign” when the league continued to leak his emails to the media.

The lawsuit also alleges, “defendants held the emails for months until they were leaked to the national media in the middle of the Raiders’ season in order to cause maximum damage to Gruden.”

The NFL has continued to say that the email leaks did not come from the league itself.