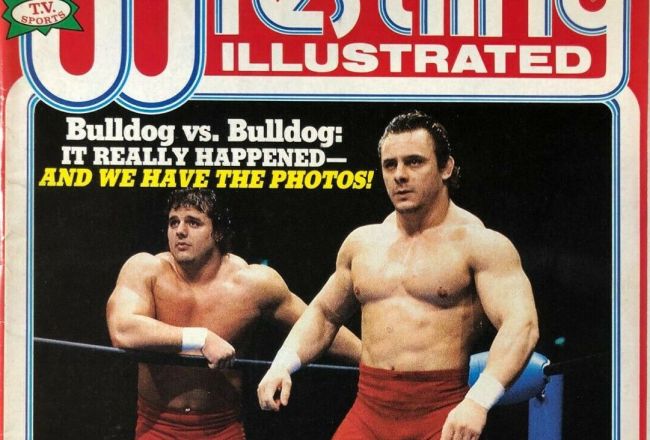 The British Bulldogs were an amazing tag team during their WWE run in the mid-1980s.

The Dynamite Kid was the original high-flyer and influenced future generations of talent. Davey Boy Smith was the athletic powerhouse of the pair who would go on to singles success after the team broke up.

Bret Hart was around for the formation of the team – Davey Boy was even married to Bret’s sister – and opened up about the duo on a recent episode of his “Confessions of The Hitman.” podcast.

According to Hart, The Dynamite Kid was almost a “corrupting influence” on the naive and innocent Davey Boy, and the two men knew each at a young age, and even shared a bloodline.

“Well, Dynamite and Davey were actually cousins. They lived about a block away from each other in two different counties or two different townships. Davey was from a place called Golborne [Lancashire, England], I think, and Dynamite was from [Wigan, Manchester, England].

Anyway, they were not that close of friends growing up. Dynamite, I think, was always a bit of a bully and a bit of a hard kid. He was always hard, tough.

I think he was one of those guys who had a chip on his shoulder, had a bit of a small man complex, but he was an amazing wrestler.

Dynamite ended up learning a style [of wrestling] and Davey ended up following in Dynamite’s footsteps, going through the same training school, and Dynamite, in my opinion, was always a little jealous of Davey.

Hart shared that The Dynamite Kid was actually slightly jealous of the younger, bigger, Davey Boy, and how the former wasn’t too thrilled when Stu Hart brought in Davey Boy to work for his Stampede Wrestling promotion.

“I remember when I told Dynamite, though, the day they saw pictures of Davey and that he was coming in.

I thought he’d be happy to know it, a new guy from England, but he was very upset, and he told me, ‘If you got him coming in, you don’t need me’, and he was going to go home.

Eventually Davey did come, and I think [Dynamite Kid] realized that we’re short of guys, and we need some guys, and let’s give him a try and see how it works, and he opened up to Davey.

He was not very happy that [Davey Boy] was there.”

Eventually, the pair become tight, and as thick as thieves both in the locker room and out in the real world. This lead to some interesting situations when the tag team had a little too much to drink.

“[Smith] and Dynamite were both very strong.

I can remember going to clubs and stuff, and when they would leave the bar, they would turn cars over upside-down in the parking lot.

You always go out to the car and go ‘the Bulldogs had been here’ because there’d be a car flipped completely upside-down.

Honestly, who’s going to stop the pair from doing whatever they want?

Check out the entire interview on “Confessions of The Hitman.”