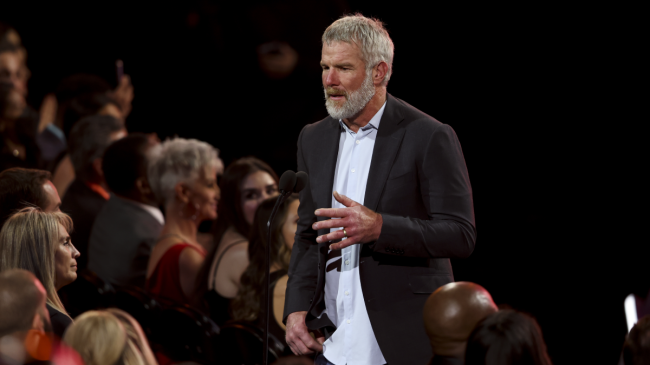 Brett Favre is in deep trouble regarding his ongoing welfare scandal in connection with Mississippi Governor Phil Bryant.

The FBI began their questioning of the former NFL quarterback for his role in the scandal earlier this month. Essentially, he was accused of accepting federal funds for making motivational speeches when in reality, he was never making those appearances at all.

According to a report from NBC News, the Hall of Fame QB was recently questioned by the FBI due to his alleged receiving of $1.1 million in 2017 and 2018 to make motivational speeches — out of federal welfare funds intended for needy families.

While he’s repaid the funds (without interest), he may not yet be out of hot water.

On Tuesday, text messages arranging a payout of those federal welfare funds for a new Southern Miss volleyball facility surfaced.

Favre is now at the center of the scandal for some incriminating text messages that have come to light in the welfare fund scandal. Adam Ganucheau of Mississippi Today posted the messages on social media this afternoon.

Favre: If you were to pay me is there anyway the media can find out where it came from and how much?

[NPO founder] Nancy New: No, we never have had that information publicized. I understand you being uneasy about that though. Let’s see what happens on Monday with the conversation with some of the folks at Southern. Maybe it will click with them. Hopefully.

Nancy New: Wow, just got off the phone with [Gov.] Phil Bryant! He is on board with us! We will get this done!

Favre: Awesome I needed to hear that for sure.

This basically shows that Favre knew exactly what he was doing, and he did it anyway. The scheme to defraud the government revolves around building a new volleyball facility at Southern Miss, where Favre’s daughter plays. It is also his own alma mater.

Moneys that were intended to go to needy families in one of the poorest states in the nation were allocated to go to the volleyball project. The Mississippi Today story claims that it totaled “at least $5M of the state’s welfare funds.”

A brutal look for Favre. Folks on social media were quick to react.

Brett Favre: Just to be clear, I, as a multi millionaire, have no issue with taking millions from the poor. I only have a problem with being caught doing it. The optics would be terrible.

Many are questioning not only his decision-making, but also his inability to not foresee these texts being discovered.

Kind of hard to believe @BrettFavre didn’t foresee these texts were likely to be intercepted https://t.co/gGD1BW4mLT

A post by Cowboys’ writer Clarence Hill summed the situation up perfectly.

“Brett Favre knew what he was doing… He also should have known from past history that his texts messages never stay private. Only thing worse than being bad criminal is a dumb criminal.”

Terrible, terrible look for the quarterback.