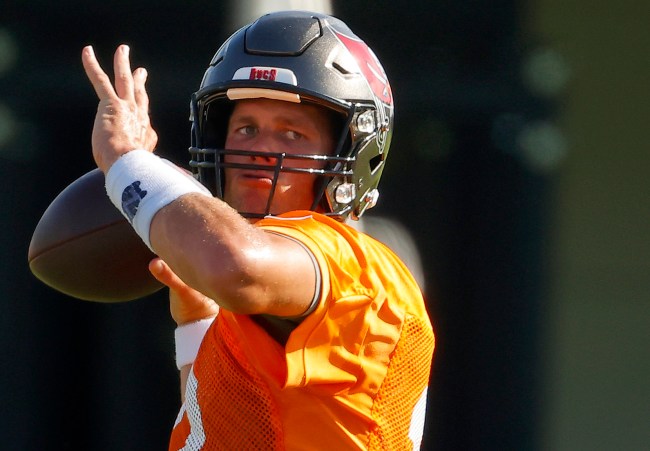 Hall of Fame quarterback Brett Favre sure doesn’t like one of his fellow signal-callers, Tom Brady, getting yelled at by his coach. In fact, Favre was so critical that Tampa Bay Buccaneers head coach Bruce Arians criticized Brady’s Week 1 performance that he went into detail on his SiriusXM show to explain why Arians may be playing with fire by doing so.

“Getting to Bruce Arians’ comments, true or not, I think the last person you want to call out after the first game of the year is Tom Brady,” Favre said Tuesday on The SiriusXM Blitz with Brett Favre and Bruce Murray. “Now, maybe they had a mutual truce going into the game, going into the season, ‘Hey, I’m going to be hard on you. I want the guys to know we’re going to treat you the same even though technically I’m not, so are you OK with it?’ If they have that truce, great. If not, I think you are barking up the wrong tree.”

Now, for context, Arians pretty much slammed Tom Brady after a miserable game against the New Orleans Saints in his first game with Tampa during Week 1 of the NFL season. With such high expectations for the Bucs this season — which included one analyst even suggesting a record-breaking offense — Arians was simply doing what any coach should do: Call out the players who didn’t perform well. Brady was one of those players.

However, Brett Favre wasn’t a fan of, you know, Arians coaching his players, and continued to harp on the topic while on SiriusXM.

“Maybe the Saints didn’t do anything that they were not ready for other than we didn’t protect very well, Tom gets hit a couple of times, you get a little jittery, it happens.

“First half of the Super Bowl against the Falcons he was getting nailed, played lackluster at best. They went in, had a come-to-Jesus at halftime, they don’t even come close to touching him in the second half and he’s flawless. So they clean up the protection, the timing, the chemistry will come. Will it come overnight? I highly doubt it, but it will come pretty quickly, though, and they very easily could be 4-1 after five weeks.”

While Brett Favre brings up some good points about the Super Bowl Brady played in three years ago, is the now 42-year-old quarterback really that same player now? Absolutely not. Plus, he doesn’t have the benefit of a championship caliber team around him like he did then. This is the Buccaneers, where the team has been together for about a month — so it’s understood (and probably expected) that Brady would struggle adjusting to new teammates in live action.

But Favre still took issue with Bruce Arians criticizing Tom Brady publicly — which is a far cry from how the legendary signal-caller was treated by Bill Belichick and Robert Kraft in New England for all those years together.

“Bruce Arians is the head coach, he’s gonna do it the way he wants to do it — and I’m not saying that it’s right or wrong — but what’s happened in New England for so many years is that it worked,” Favre said. “And I’m not saying that it’s the right formula, but it certainly is one of the right formulas. I just don’t see any good that comes out of calling your quarterback out.

Whether you agree with Brett Favre or not, it sure sounds like the Ol’ Gunslinger’s whining for Brady, and saying the six-time Super Bowl champ is above being criticized publicly. Well, sorry, Brett, but you’re wrong about that, and Bruce Arians should absolutely do things his own way and show the team that one player isn’t getting preferential treatment because of the hardware he has in his trophy room.