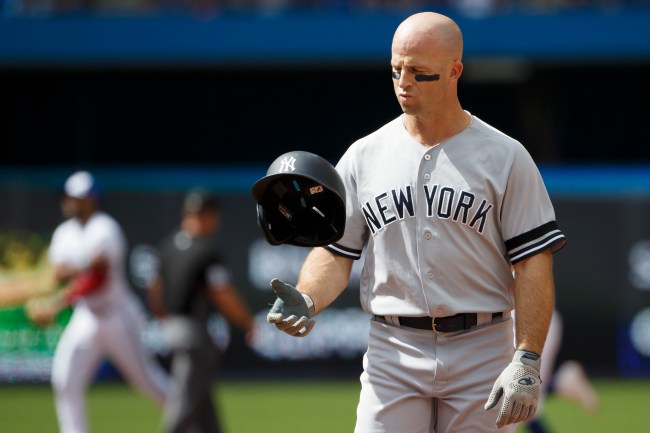 Brett Gardner seems to have a bit of a short temper. That’s not to point blame at the Yankees outfielder for going on tirades during games, but, let’s face it, if you’ve watched the team play at all this season, you know the guy is often seen chirping with umpires or blowing up in the dugout — which, you know, is part of baseball. Remember, this is the same dude who cut his own lip after throwing his helmet during a game earlier this summer, so it’s not as if the umps are always to blame.

Considering Brett Gardner always gets his money’s worth during an aggressive dugout tirade, a picture from a writer named Bryan Hoch — who has covered the Yankees since 2007 — shows just how much punishment the dugout roof has taken this year from Gardner’s outbursts. Just take a look at the amount of dents the poor roof has endured.

In case you were wondering what Brett Gardner has done to the top of the #Yankees dugout … #LetBrettBang pic.twitter.com/CO9QO60uDh

Damn, Brett, get angry much? That’s some serious damage, but, honestly, it’s impressive AF that he’s continued to add to the dents over the course of the season.

Although Gardner’s dugout tirades have become a popular event this season, the outfielder knows that he’s not doing anything wrong — at least, not in terms of MLB rules — so it doesn’t sound as if he’s going to hold back showing his frustration.

Gardner said he has never been told that banging the dugout roof with his bat is against the rules. He’s right. It’s not. It’s no different from slamming a helmet over and over or flinging a glove a few times. It might be petulant, but it’s not worthy of ejection.

I don’t give a damn that this is “petulant,” as the above tweet from YES Network’s Jack Curry put it, because Brett Gardner should show a little emotion when he’s pissed off at either himself or a bad call from the umpire. Sure, he’s a grown ass man, but nobody should be upset that he wears his heart on his sleeve. Obviously, not everyone agrees with me, because some on Twitter think the Yanks’ player needs to show a little more resistance to such behavior. What noobs.

Bill him for that. Unacceptable

It is a terrible look and it shouldn't be allowed…it's something the team should have stopped.months ago.

That’s just being a big baby! Not cool.

Enough is enough stop with the immature behavior

Brett Gardner’s intensity might not be for everyone, but, really, who gives a damn. The outfielder has proven to be a clubhouse leader and is showing emotion that baseball needs, so, while some may be butt hurt over the damage the dugout roof has taken, nobody’s getting injured here, so everyone needs to stop being so sensitive.