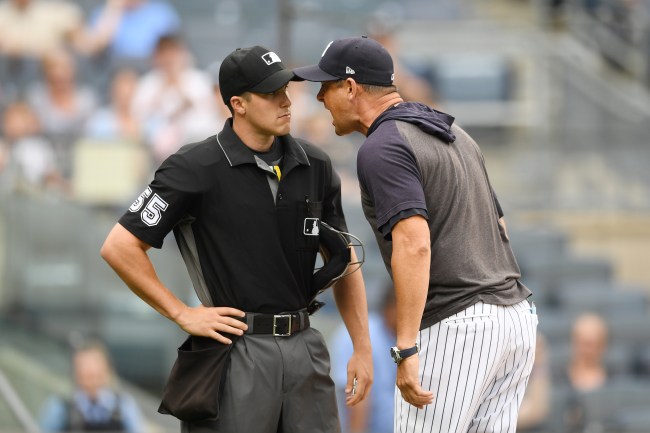 The New York Yankees hosted the Tampa Bay Rays for a doubleheader on Thursday after Wednesday’s game was postponed due to weather. The Yankees won both games on Thursday (2-6 and 1-5) to take an 8-game lead in the AL East.

Despite losing three in a row to the Yankees, the Tampa Bay Rays are still in second in the division and only 1-game back in the AL Wild Card race….But I digress, we’re here to marvel at Yankees manager Aaron Boone’s glorious ejection.

Boone argued a call, got himself ejected, and went on a profanity-laden rant the likes of which I haven’t seen in sports in as long as I can remember. Aaron Boone was mic’d up for all these f-bombs and the footage quickly hit social media yesterday after he was ejected.

I’m trying to think of this could happen in any other sport and if this happened in the NBA or NFL the coach/manager would probably be fined $100,000 and suspended 10 games. I could easily see this happening in Minor League Hockey but it’s hard to imagine a world where this goes own in the NHL. Soccer? Maaaaaaybe, but there’d be definite repercussions as well.

I’ve included two versions of the clip, one from Twitter which is the straight footage of Aaron Boone’s mic’d up rant and another from YouTube which has that footage but also puts it into context. Let’s check it out:

Here is the full sequence of the Boone ejection. Hot mics galore. pic.twitter.com/R6Vw0qw0qn

I canceled my MLB.TV subscription around a decade ago but I’d renew it IN A HEARTBEAT if it meant I had access too raw audio footage like this. Throw a mic in the dugout so we can hear what the players are talking about between innings and I’d pay 5x the price of membership, but I know they could obviously never do this because teams would use it to spy on opponents.

I love New York but I hate the damn Yankees. It’s my favorite city in the world, my home away from home after living there for a decade, but I’m a Rays fan and can’t stand those stupid ass pinstripes and there ten million championships…That said, this was possibly the best MLB footage I’ve seen since George Brett‘s story about shitting his pants. If I didn’t hate the Yankees so damn much this might actually make me a fan.

Here’s that George Brett story if you’ve never seen it:

MLB teams need to realize that fans like myself will pay $$$ for a dedicated TV channel if it gives us candid footage like Aaron Boone’s rant or George Brett’s story. We don’t care about the fluff pieces on the players hosting charity golf tournaments. We want to see the real players and what they’re like when they don’t think the cameras are rolling.