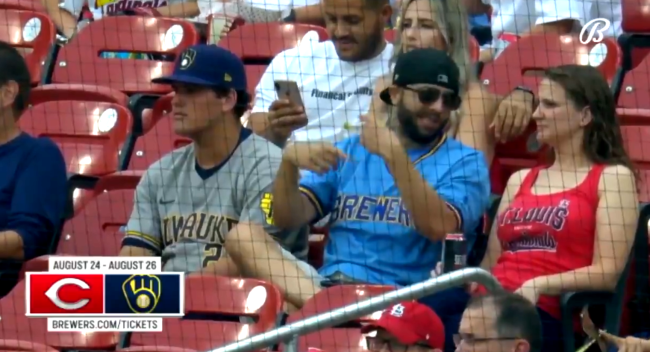 The Milwaukee Brewers’ announcers for Bally Sports Wisconsin, Brian Anderson and Bill Schroeder, had some time to kill during a recent broadcast of the team’s game against the St. Louis Cardinals.

Luckily for them, and anyone who was watching, a cameraman and the director were able to lock in on a Brewers fan who appeared to be trying to explain the finer points of pitching to the woman seated next to him in the stands.

The woman, rocking a Cardinals shirt, appeared to have that dazed, deer in the headlights look that females of the species get when they either (1) don’t care about what the man is saying, or (2) is being mansplained something that they already know.

Schroeder, and Anderson in particular, decided to try and add a little fictional, but probably not too inaccurate voiceover to the man’s conversation with the woman, making him sound like a combination of Al Bundy and Uncle Rico.

“Aww, he’s telling her how he used to it! ‘Yeah, I remember when I was in high school I threw that nasty curveball… shoudla seen em! Had big rotation on it. I’ll show you pictures when we get back home,'” Anderson pretended the fan was saying to the woman. “‘Got some video too. It’s black and white, but it’ll be great. You know what I mean?’

“She’s not buying it either is she?” Schroeder chimed in.

“‘Really, yeah, I mean, I was great,'” Anderson continued on with the imaginary conversation. “‘You should have see… I coulda gone pro, but I had an argument with a coach and we didn’t quite see eye to eye.”

“That trick elbow got me,” Schroeder interjected.

“He didn’t like that I wore my hat backwards,” Anderson closed it out.

Reactions on Twitter were almost as funny as the Brewers announcers.

This is equivelant to this meme pic.twitter.com/Q9tVNuzXR8

She's thinking: what had more "spin rate" - his curve ball in high school or the story he's telling me?

Good stuff all the way around.