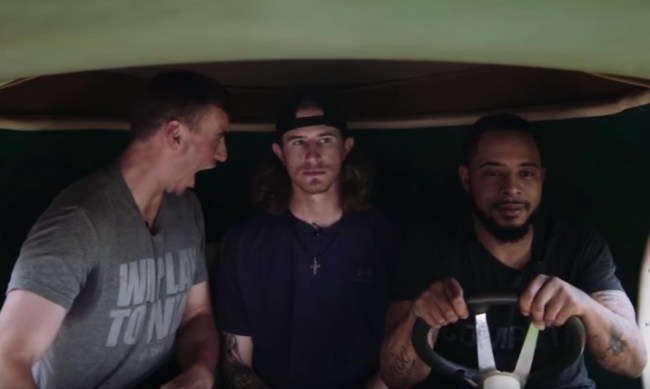 Dumb and Dumber (1994) is one of the best comedies ever produced. It’s arguably Jim Carrey’s best movie. But that’s debatable because he was on a killer streak of comedies in the 90’s and early 00’s but hasn’t really done anything worth watching in the past decade. But I’m not here to take a Cleveland Steamer on Jim Carrey‘s career, I’m here to talk about how great this Dumb and Dumber tribute from the Milwaukee Brewers is.

The Milwaukee Brewers released this Dumb and Dumber tribute the other day that almost instantly went viral, and now Jim Carrey has responded to pay his respect to their excellent video. In the clip, pitchers Brent Suter, Josh Hader and Jeremy Jeffress reenact the scene where Harry and Lloyd pick up a hitchhiker and proceed to annoy the ever living shit out of him by busting out the ‘most annoying sound’ in the world:

Ahhh Milwaukee…where the beer flows like wine! I gotta admit, when I saw this Dumb and Dumber tribute from the Brewers I was tickled stupid. @bruter24: you got some comedy chops or a severe behavioral disorder. The difference is negligible. Spank You Kindly, guys! https://t.co/PgNy0e1Gu6

Here’s the Milwaukee Brewers’ original clip on YouTube if you’d rather watch a video there than on Twitter:

This isn’t the first time the Milwaukee Brewers have paid tribute to a classic film. Earlier this season, they recreated one of the most iconic scenes from The Sandlot in honor of the film’s 25th anniversary:

The Brewers are currently playing .591 baseball (39-27) and sitting second in the NL Central just behind the Chicago Cubs. Producing these videos clearly hasn’t affected their quality of play and if anything they’re probably benefitting from the camaraderie that goes into doing stuff like this and that’s translating to on-field results.