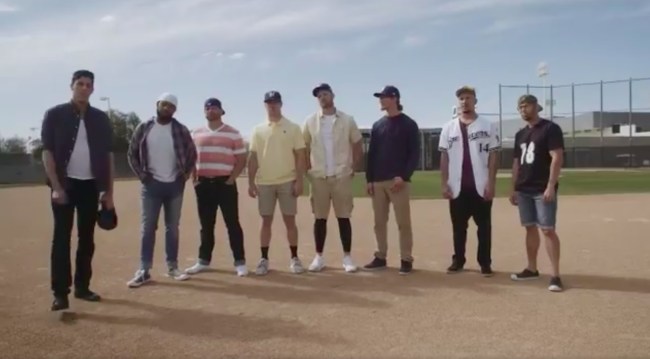 The Sandlot was released on April 7, 1993 and has since become a cult classic. To celebrate the 25th anniversary of the beloved baseball movie, the Milwaukee Brewers reenacted the iconic scene from The Sandlot. This brilliant reenactment was done shot-for-shot and the Brewers did a fantastic job of casting the “actors.” On Sunday night, the official Twitter account of the Milwaukee Brewers shared the video on Sunday night.

Stephen Vogt truly looks and acts like a grown-up version of Hamilton “Ham” Porter. Christian Yelich plays Benny “The Jet” Rodriguez, Brett Phillips is killing me as he portrays Scotty Smalls, Eric Sogard as Squints, Hernan Perez as Yeah-Yeah, Jeremy Jeffress as Kenny Denunez, Josh Hader as Bertram Grover Weeks, Chase Anderson as Repeat, and Jett Bandy as Timmy. The recreation does feature “The Beast,” but the baseball-snatching monster is not a gigantic English Mastiff, but rather a part-Bichon Frise mixed-breed named Hank. “Remember kid, there’s heroes and there’s legends: Heroes get remembered, but legends never die. Follow your heart kid, and you can never go wrong.”