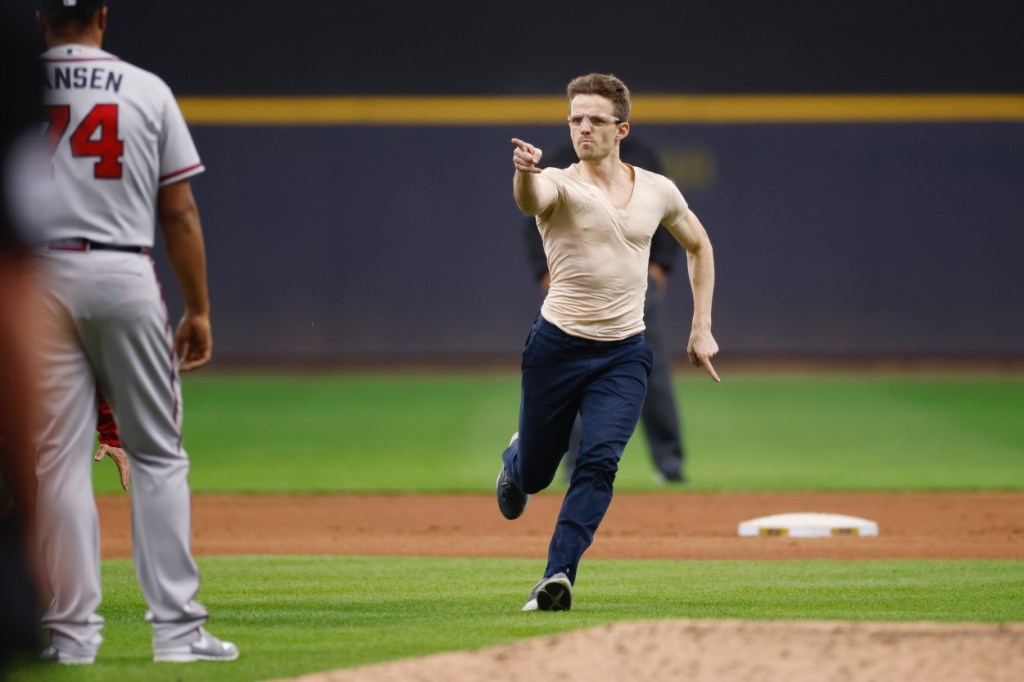 The Atlanta Brewers and Milwaukee Brewers faced off in a thriller on Wednesday. Milwaukee and Atlanta are both contenders for the NL Pennant and this game has shades of MLB Playoffs intensity.

It seemed like Brewers fans were in for a LONG day when Atlanta opened the top of the 3rd inning with 4 runs. The Brewers then slowly crawled back with 2 runs in the 4th, 1 in the 6th, and then 1 run in the bottom of the 9th to send the game to extra innings. Milwaukee ultimately prevailed with Keston Hiura hitting a walk-off home run in the bottom of the 11th after getting called up THAT MORNING from Triple-A.

Most of the crowd was on their feet for that improbable walk-off home run but one Brewers fan wasn’t there to see it. He’d been detained by six (or more) security guards after storming the field in his skin-tone t-shirt and runner’s sunglasses. Then leading security on a wild goose chase as he athletically juked his way around the field, sending one security guard flying with proverbial broken ankles.

A shirtless fan has joined the players on American Family Field. pic.twitter.com/YnOCjYrPLk

Aaaand here’s the same video set to ‘Yakety Sax’ because every good ‘fan runs on the field’ video requires the Yakety Sax soundtrack. I don’t know why this is marked as ‘potentially sensitive content’ but it’s the video above with a new soundtrack.

Here’s another angle of the fan evading security…

A fan onto the field during the @Brewers vs @Braves game. Danced in centerfield and then made it all the way to homeplate. Took security a hot minute to even realize he was on the field #ATLvsMIL @BarstoolBigCat @barstoolsports pic.twitter.com/40X3wYb9kl

The security guards displayed remarkable composure when they finally wrapped up the shirtless Brewers fan. I was a bit surprised the guy who got juked out of his shoes didn’t come in HEATED and HOT but they’re clearly professionals.

Also, until I went to Getty Images to search for licensed photographs from the Braves-Brewers game I was 100% convinced this fan was shirtless. Even TMZ Sports published an article calling him shirtless. But forget security, someone needs to call the fashion police on this dude for rocking a skin-tone t-shirt with that complexion.

And correct me if I’m wrong but is he wearing clear runner’s glasses for improved aerodynamics?