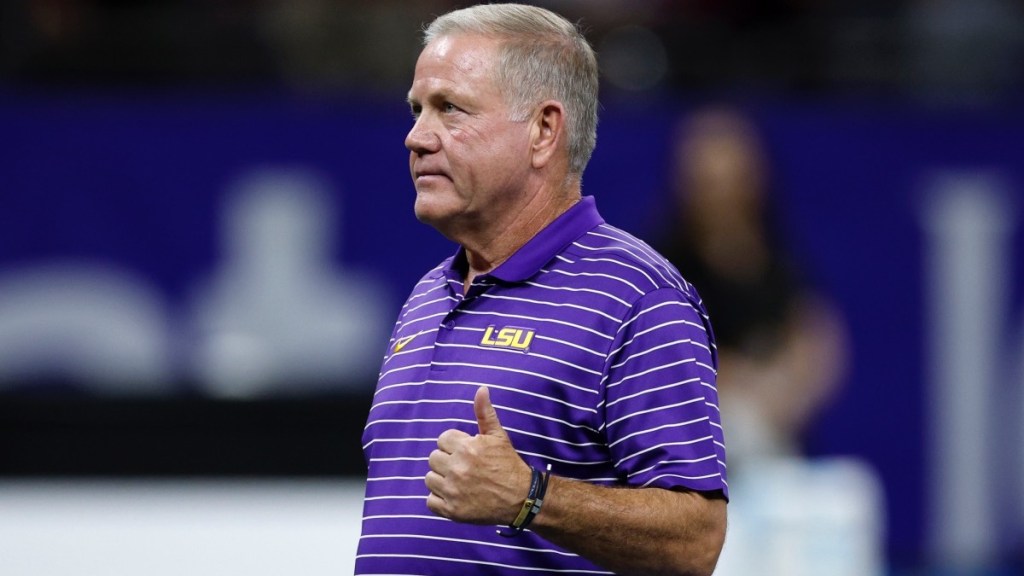 Brian Kelly and the LSU Tigers are 0-1 heading into Week 2 of the CFB season. LSU should have an easy time this week when they face Southern U. where they’ll be almost 40-point favorites.

But they are coming off an emotional loss to the Florida State Seminoles. The Noles led LSU by two touchdowns at one point before Brian Kelly’s Tigers came roaring back into the game.

It seemed like LSU would pull off the improbable win after they drove the field 99 yards for a touchdown to come within 1-point of FSU until the PAT was blocked and time expired with Florida State winning 24-23 in New Orleans. Brian Kelly’s star wide receiver Kayshon Boutte was visibly angry after the game and even removed all mentions of the LSU Tigers from his personal Instagram, a move that didn’t go unnotice by fans.

Speaking with the media this week, Brian Kelly’s press conference got off to a weird start. A reporter absolutely demolished his world when Kelly went on a rant about them showing up on time and the reporter responded by saying they’d show up on time if the Tigers won… In the same day, LSU’s head discussed Kayshon Boutte’s body language and a talk they had after the game.

Brian Kelly on Kayshon Boutte: “Yeah, I think there were a number of those guys that were disappointed in their play. They’re so hard on themselves. They want to succeed at such a high level. So, yeah, I had a conversation with Kayshon, and his standard is so high.”

“You know, hadn’t played in a while. Been out with an injury. Maybe there was a little rust there. He’s the least guy that I’m concerned about on our offense. But he’s not. He carries a that with him every day. So he’s learning to deal with that.”

“He’s a young man who hasn’t been in this situation before and he needs some guidance, so we spend some time and work some things out that will help him handle the scrutiny. And quite frankly, the scrutiny was strong. His reaction was probably similar to what my reaction would be as a 60-year-old. I mean, he has handled it in a manner that he’ll learn from and continue to grow from.” (quotes via 247)

Brian Kelly said he spent some time with Kayshon Boutte following the game.

It's clear he has no worries on that front. Kelly said he's very confident Kayshon will have a big season for #LSU.

"He's the least guy I'm concerned about on our offense."

Brian Kelly said Kayshon Boutte may have needed to knock off a little bit of rust and they worked on how to handle scrutiny. But: “He’s the least guy I’m concerned about on our offense.”

Brian Kelly’s a savvy coach. He’s the winningest active coach in College Football. He knows the LSU fanbase wants to see the offense explode in Week 2 against Southern U, an easily winnable game where they’re favored by nearly 40 points.

Kayshon Boutte only had 2 receptions for 20 yards against the Florida State Seminoles. Quarterback Jayden Daniels threw for 209 total yards (26-for-36) and never had much time all nigh to get the ball to his wide receivers. The Noles sacked him 4 times.

In order to navigate their SEC schedule with their heads held high this season, Brian Kelly will need to figure out how to get the offensive line to give Jayden Daniels more time. That’ll start this week against Southern U.

As for Kayshon removing every single mention of the LSU Tigers from his Instagram after the game, there’s been no change there. His IG profile is still empty. It’s likely he just ‘archived’ everything and can bring back all his old posts whenever he wants but we can’t really know for sure.