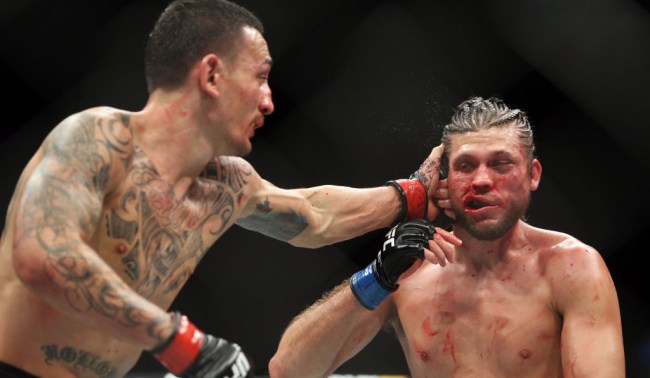 Brian Ortega and Max Holloway participated in one of the most brutal and exciting MMA fights fans have witnessed in sometime when they went toe-to-toe at UFC 231 on on December 8th.

Unfortunately for Ortega, he came out on the losing end of the Fight of the Night, when after four rounds the doctor decided that he had taken enough of a beating – a beating that he appeared to have miracluously recovered from just one week later.

Somehow, the damage to Ortega’s face and eye weren’t the worst of the injuries he suffered during the UFC featherweight title fight with Holloway. Turns out that the injury that wasn’t as apparent, but was much worse, was the one to his thumb, which was broken and required some pins being inserted to set it right.

Naturally, because 2019, Ortega decided to share video of himself having the pins removed from his hand on social media. And basically, all you need to know about the video is that Instgram has it labeled “This video contains sensitive material that some people may find offensive or disturbing.”

Damn… now we have to watch it, don’t we?

“I didn’t feel a thing,” Ortega says in the video as the pins are jerked out of his hand.

Wish I could say the same after watching it happen.

I didn’t feel a THING. 🤪 #recovery