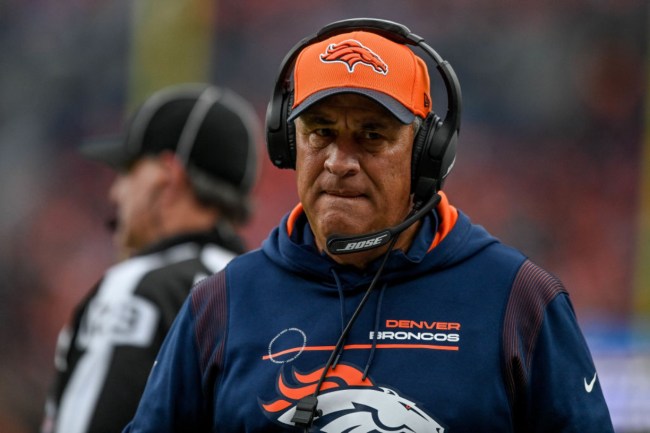 After going 7-9 in his first season and just 5-11 a year ago everyone with a brain realizes that this season was going to be a make-or-break year for Fangio in Denver.

With the Broncos sitting at 7-8 on the year, Fangio’s future is very much up in the air. If Denver were to somehow beat the Chargers and Chiefs in the final two games of the season and sneak into the playoffs one would assume Fangio would be given another year, but that’s a tall order.

Vic Fangio Has Nothing To Really Worry About

On Monday afternoon, a day after his team lost 17-13 to the Raiders, Fangio was asked about his job status and whether or not he’s worried about his future in Denver.

His response was an honest and respectable one.

“For a lot of reasons, I do not worry about it,” Fangio told reporters. “Do I acknowledge that it’s out there and could happen? Absolutely.”

Some Broncos fans out there may not appreciate Fangio saying he doesn’t worry about his job status. To them, I’d say you have to respect his authentic answer and realized he said nothing wrong here.

Why should Fangio, or any other NFL coach, worry about their job status? First of all, if they’re worried about their job then they’re likely not going to perform well. Secondly, Fangio is set and has been set, for quite some time now.

This is a guy that’s been coaching in the NFL in some capacity since the early 1980s. He doesn’t have to worry about a thing, if he gets fired, he gets fired, he’s still going to be just fine.

We can’t assume Fangio shares that same mindset based on this just one quote, but the fact of the matter is that Fangio doesn’t have too many “worries”at 63-years-old and 35+ years of coaching under his belt.