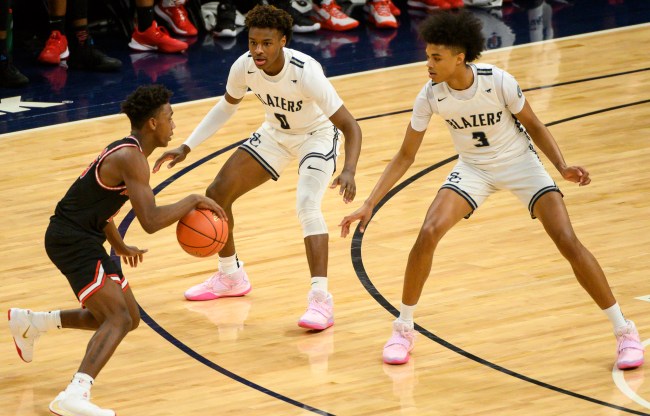 In the summer of 2018, NBA Twitter erupted after a 13-year-old Bronny James attempted a dunk in an AAU game. Despite missing, the Ball is Life YouTube clip was viewed over 7 million times, with fans eager to witness what the genesis of a potential Genetic Freak Gene.

Two short years later, the 15-year-old freshman sprouted to 6-foot-2 and solidified himself as a valuable contributor on one of the nation’s top teams, finishing the season 30-4.

While Bronny’s Sierra Canyon freshman stats on paper (4.1 points in 15 minutes per game) don’t sniff those of his father’s during his freshman season at the less prestigious St. Vincent-St. Mary (21 points and 6 rebounds per game), the eldest James spawn has already done things on a basketball court that promise a bright future.

While most 15-year-old’s struggle to grab the rim, Bronny has consistently thrown down windmills.

This kid is so talented

Brandon Boston Jr., a consensus five-star recruit (Kentucky bound) and one of Bronny’s Sierra Canyon teammates, believes that we are witnessing just the tip of the Bronny James iceberg of potential. The McDonald’s All American recently claimed that by the time Bronny is a senior (2023), he could be the best player on the planet.

“By the time he’s a senior, he might be the best player in the world.”

By then, Bronny’s father will be 38 years old and it’s possible the young buck could eclipse the old bull.