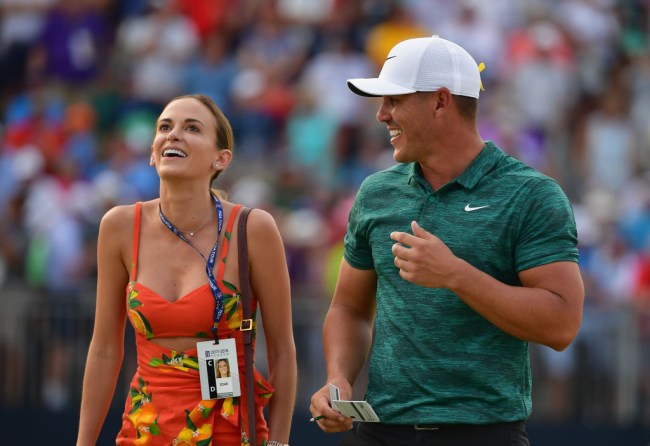 Brooks Koepka has been in an all-business mood all week at the PGA Championship as his seven-shot lead heading into the final round reflects. Then again it’s a major championship and we’re talking about Brooks Koepka who turns into an actual machine during these big moments.

He arrived to Bethpage Black alongside girlfriend Jena Sims, an actress who appeared in an episode of Entourage, on Sunday and that all-business mood showed itself big time. Sims clearly leaned in for a quick smooch not once, but twice and Koepka was not having any part of it.

Sims even wraps her arm around him for the first attempt, but instead, Koepka went with fist-bumping someone off-screen rather than giving her a kiss. She thinks ‘ok, that was just bad timing he couldn’t leave that guy hanging’ and goes in for attempt number two. Nope, no luck there either as Koepka mumbles and looks off in the distance.

Koepka isn’t a guy that shows any emotion at all, ever, and he wasn’t about to start moments before going for his second straight PGA Championship.

They did look to have a pretty nice time together after the Masters back in April though.

As it stands at the time of this story, Koepka is holding a four-shot lead over Dustin Johnson. Sure, the seven-shot lead has gotten a bit smaller for Koepka but he hasn’t shown one ounce of worry or emotion out there. He’s done his part and hasn’t made that one big mistake that could make things interesting.

Sims, however, may say he made a big mistake before the round even got going by denying her those kisses.