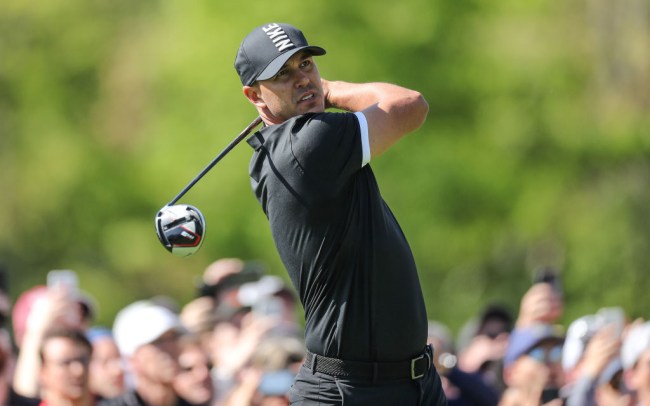 The PGA Championship has been Brooks Koepka’s to lose since Friday afternoon and heading into Sunday’s final-round the rest of the field is playing for second. Koepka carries a whopping seven-shot lead heading into Sunday’s final-round and it’s safe to say the only way he won’t be hoisting the Wanamaker Trophy is if they make him play left-handed; even then you’d be dumb to bet against him.

Koepka will win his second straight PGA Championship and his fourth major in his last eight major starts. While that’s all but fact, there is still a handful of great names battling for second including the likes of Jordan Spieth, Dustin Johnson, Adam Scott, Hideki Matsuyama and Xander Schauffele just to name a few. It’s also worth remembering that a top-four finish on Sunday guarantees you a spot in next year’s Masters, so that’s certainly something to battle for.

There should be plenty of drama on Sunday afternoon even with Koepka running away with it, after all, it is still Sunday at a major championship. We’ll be keeping you up-to-date with all of the action from Bethpage Black throughout the day.

6:42 PM EST: Koepka makes his par putt at the 18th and wins it in style. He made it interesting with some mistakes, Bethpage turned into a mini tornado but at the end of the day Koepka’s lead was too much for anything to change the obvious outcome. He’s the first wire-to-wire winner of this event since 1983 when Hal Sutton did it.

6:39 PM EST: Koepka was able to find the fairway with his lay up shot leaving himself just under 70 yards into the green. Overhearing the audio he takes a ‘medium lobwedge’ and sticks it to about seven-feet. That will officially do it, Brooks Koepka is going to win his fourth major in 23 months. Absolutely bananas.

6:33 PM EST: Well, he’s not in yet. Koepka steps onto the 18th tee and pulls his teeshot left onto the side of the fairway bunker. He needs a bogey to win his second straight PGA Championship.

6:26 PM EST: Johnson stops the bleeding at the 18th with a very sporty up-and-down from the gallery to finish the tournament at six-under. Koepka a hole behind faces a 40-foot birdie chance, but the lag putting fails him as he three putts for bogey. He’ll head to the 18th with a two-shot advantage.

6:18 PM EST: Koepka finds the dancefloor with his second at the 16th and clinically lags his lengthy birdie chance. He made easy work of one of the tougher holes on the golf course today. Johnson finds the fairway bunker at the 18th then pulls his approach deep into the gallery. DJ went from being right there to not even close.

6:10 PM EST: DJ’s chip out of the bad lie left him with a 17-foot par bid, but he misses it on the low side dropping him to six-under and three back of Koepka. That’ll all but do it, especially with Koepka vaporizing a tee shot at No. 16. Disappointing consecutive bogeys from DJ in the big moment; remember, he only has one major title to his name.

6:05 PM EST: Koepka leaves his approach shot on the wrong level of the 15th green, but does very nicely to two putt for his par. Johnson two holes ahead hits a poor shot at the Par 3 missing the green a touch long and right with his ball sitting in an atrocious lie.

6:00 PM EST: DJ nearly pulls off the absurd up-and-down from over the green, but his par putt from around 10-feet burns the low edge. DJ moves to the 17th tee trailing by two while Koepka is sitting in the fairway at the 15th.

5:52 PM EST: And now that is four straight bogeys for Koepka. His chip rolls long off the green and he two putts for bogey at the Par 3. Seconds later, standing in the middle of the fairway, Johnson flies the green at 16 so he’s staring bogey in the face as well. As it stands the lead is only one for Koepka at nine-under.

5:46 PM EST: This is unbelievable. Koepka absolutely airmails the green at the Par 3 14th and is facing an extremely tough chip shot. DJ hits the fairway on No. 16. Buckle up, folks.

5:41 PM EST: Make that THREE straight bogeys for Koepka as he makes a six at the Par 5 13th. He didn’t quite find the fairway with his punch shot out of trouble then failed to get up-and-down from just short of the green to the back pin location. He now sits at 10-under

Oh, and hello. DJ makes birdie at No. 15 for the fourth straight day and is just two shots back. Here we go.

5:26 PM EST: Koepka hits his teeshot off of the planet left, but looks to have drawn a good lie. Luckily for him the worst swing of the day came on a Par 5. DJ meanwhile two putts for par at the Par 3 14th to remain four back at seven-under.

5:22 PM EST: So, Koepka has turned into a real human over the past two holes as he made his second straight bogey. He left himself a crazy-fast par putt above the hole and missed it on the high-side. He falls to 11-under with the lead shrinking to four. He’s got a Par 5 waiting for him though.

Of the last 26 players to finish their rounds, 9 failed to break 40 on the back including a 43 from Finau. No let up out there.

5:18 PM EST: DJ comes up well short with a punch six-iron into a massive breeze and elects for the putter from off the green. It was the right choice as he managed a fantastic lag putt for a tap-in par to remain at seven-under. No question Johnson was looking to birdie the Par 5, but the tee shot killed those chances.

5:09 PM EST: Another wayward tee shot from Koepka as he loses one right at the 12th and settles into the thick junk. DJ meanwhile just had to punch out of the rough while avoiding a tree with his second at the 13th. At least the guys are still making it worth-while to watch?

5:06 PM EST: Nope, Koepka refuses to make his first double bogey of the week at the 11th. He had some trouble from the get-go after a bad teeshot and left himself a seven-foot putt for bogey before sneaking it into the side. Johnson picked up a par at No. 12, which is a tough feat while the wind continues to pick up in Farmingdale.

4:46 PM EST: Brooks is now throwing darts out at Bethpage. From 160 yards out he pulled a wedge with the wind howling and nearly holed it. He’ll make that to move to 13-under. DJ up at No. 11 wasn’t able to get it up-and-down from the bunker and falls to seven-under on the day.

4:35 PM EST: Koepka makes the turn at even par for the day and starts his back-nine with a massive tee ball at the Par 4 10th. He’s nine holes away from winning his fourth major in his last eight tries. Johnson could have (a little) something to say about it though.

4:17 PM EST: Here comes DJ. Koepka’s best buddy makes the turn at eight-under for the tournament after another birdie at No. 9. Koepka meanwhile had another two-putt par at the seventh to remain at 12-under.

3:56 PM EST: Johnson makes a routine par at the seventh while two holes back Koepka lagged up a lengthy birdie try on his way to a par.

3:45 PM EST: Koepka keeps on keepin’ on at the sixth as he gets up-and-down again to stay at 12-under. Pars are Koepka’s friend today and he’s 2-for-2 today on saving pars. Varner on the other hand made yet another bogey to move to five-over on the day.

3:38 PM EST: DJ isn’t going away quietly moving to two-under on the day and seven-under for the tournament with a nice birdie at the fifth. He was definitely a name you circled as someone who could make things at least a little interesting today chasing down Koepka.

3:33 PM EST: Koepka cozy ups his eagle bid for a tap-in birdie at No. 4 to get to 12-under for a six-shot advantage. Varner gave himself a good chance at bogey after the debacle with the lost ball, but left the putt short before carding his second straight double bogey moving to 1-under for the tournament.

3:21 PM EST: Things are going from bad to worse for Varner. After pulling his tee shot at four way left into the native grass, the tall grass completely shut his wedge face shut resulting in basically an opposite shank into the trees. He was unable to find his ball so had to go back to the native grass, take a drop to play his fourth.

Koepka found the middle of the fairway and hit the Par 5 green in two and is looking at a makeable eagle chance.

3:11 PM EST: Varner III missed the green left on the Par 3 third in a tough, tough spot. After leaving his chip well short of the hole he three putted for a double bogey. Koepka made the lengthy hole look rather easy with two-putt par. Meanwhile, Johnson makes a birdie at the Par 5 fourth to get to six-under.

3:02 PM EST: Patrick Cantlay is two-under through his first five holes today and moves to five-under. We saw him come out of nowhere on Sunday at Augusta, maybe he can post a low number this afternoon and cross his fingers for a Koepka collapse.

2:57 PM EST: Just as he did at the first, Koepka slightly pulled his tee shot on No. 2 into the primary cut but was still able to knock it to 20-feet. Koepka routinely two putted for a par four while Varner put together a nice up-and-down from just off the green to stay five shots back with a par of his own.

2:46 PM EST: Well, what needed to happen to make things (sort of but not really) interesting at the first hole happened. Koepka makes bogey as he left his approach shot well short out of the rough and Varner III had a tap-in birdie. The lead is now five for Brooks.

2:35 PM EST: And we’re off. Koepka finds the left-rough off the first tee while his playing partner Harold Varner III smashes one center-cut.

2:00 PM EST: Everyone is on the course now outside of the final three groups. The broadcast has mentioned the ‘breeze’ five times in five minutes so they’re definitely trying to bait us into the off chance Koepka struggles.

1:55 PM EST: Koepka is out warming up on the range getting set to go. When he arrived it looked like his lady friend Jena Sims wanted a quick kiss, but the machine wasn’t having it.