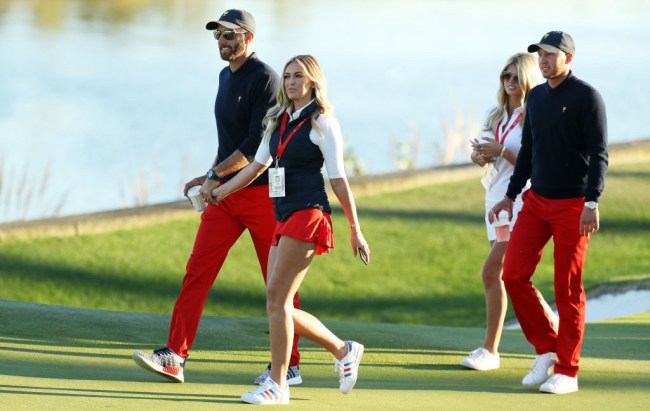 It doesn’t matter if you are the number one golfer in the world like Dustin Johnson. If you hit golf balls in the house, your wife is going to yell at you. (Wait, they’re still not married?)

I guess when your fiancée is the daughter of the greatest hockey player in history like Paulina Gretzky is then being the best golfer in the world doesn’t get you too many free passes at home.

Speaking to For The Win last week, DJ told a story of how he’s already getting oldest son Tatum into golf. Of course, that means that he and Tatum have to practice and sometimes that practice makes its way inside the house.

And what does his finacee Paulina Gretzky think of that?

“I make sure she’s not home,” he said with a chuckle.

But what happens when she gets home?

Excellent. Glad to hear he gets in trouble for doing stupid guy stuff around the house just like the rest of us peasants.

Johnson also addressed several other topics including golf fans, his secret to driving the ball far and when the hell is he and Paulina going to get married?

Let’s hit on that last one, shall we? We shall.

Are you two planning a wedding soon?

We’re going to for sure, we don’t have a set date yet, but we’re in the planning process.

You probably don’t want to publicize it, but where might you have the wedding?

Wherever Paulina wants to have it.

Just a wild guess, but based on her recent Instagram posts, I am betting that it will be somewhere tropical.