The Internet Reacts To Browns’ Mychal Kendricks Being Charged With Insider Trading By Feds After He Made $1.2 Million In Illicit Scheme 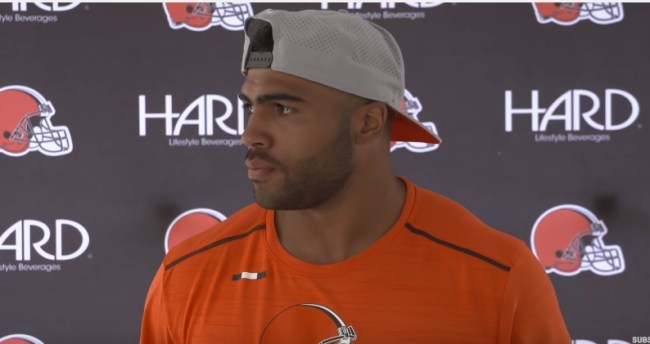 Browns linebacker Mychal Kendricks is currently in some deep trouble with the law.

Early this morning, the Philadelphia US Attorney General brought charges against Kendricks and another man for insider trading.

Wow. US Attoney in Philadelphia announces criminal charges of conspiracy against #Browns LB Mychal Kendricks and a global investment banker, and says they engaged in an insider trading deal.

Apparently Kendricks made $1.2 million in the scheme.

Kendricks provided thousands in cash and #Eagles tickets in exchange for insider stock information. Authorities say Kendricks made a large profit, around $1.2M.

Kendricks made nearly $1.2 million by trading ahead of four acquisition announcements, according to officials. He is currently a linebacker for the Cleveland Browns.

Damilare Sonoiki, a former partner at a global investment bank, is also being charged with insider trading for receiving kickbacks from Kendricks, including Eagles tickets and other perks, officials said.

Sonoiki set up a bank account that Kendricks could access, according to investigators. Soon after they began their trading and used coded language in a text to disguise the initial $80,000 transfer into the account.

Kendricks paid Sonoiki in cash during in-person meetings, including one at Philadelphia’s 30th Street Station.

Kendricks released a statement shortly after the indictment and admitted guilt while vowing to pay back all the money he stole.

A statement from #Browns LB Mychal Kendrick, who has just been charged by the feds for insider trading. Wow. pic.twitter.com/0IEsV6lPTh

The Kendrick news comes the night after the Browns linebacker caused a firestorm for criticizing his former Eagles teammates during last night’s episode of Hard Knocks.

“Playing with Nick Foles, I realized on his long balls he has like a tear-drop effect. So (CBS), he’s a little slower on that ball coming in.”

“No. 86 is the best receiver on the team. Notice I say receiver…”

On Hard Knocks, Ex-Eagle Mychal Kendricks disparaged Zach Ertz's blocking in pre-game scouting report. "Hit his ass over and over, he don't want no smoke."

Of course the Internet had some hilarious reactions to the bizarre Kendricks’ news.

Mychal Kendricks: The Browns are more talented than the Eagles

The Feds: you are under arrest sir

How could Mychal Kendricks be guilty of insider trading when he couldn’t even get himself traded from the #Eagles? pic.twitter.com/ivVTHpGZ2F