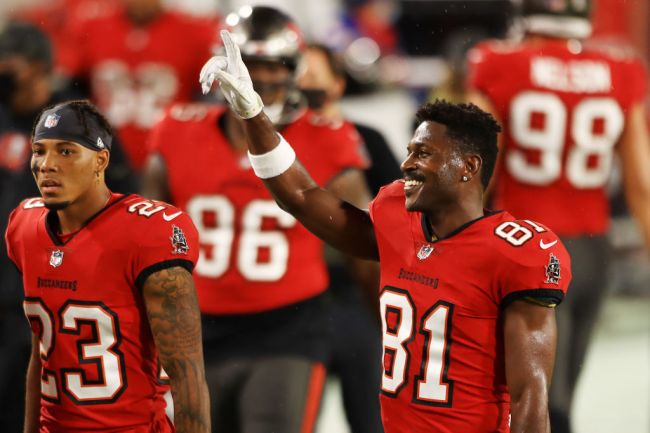 Shortly after Antonio Brown signed with the Buccanneers after serving his eight-game suspension to begin the season, David Ovalle of the Miami Herald reported that Brown may have been involved in yet another off the field incident prior to making his way to Tampa Bay.

The report accused Brown of destroying a surveillance camera as well as throwing a bike at a security guard shack after he was repeatedly fined by his homeowners’ association for violating policies.

Bucs head coach Bruce Arians joined Sirius XM NFL Radio on Wednesday and was asked about Brown’s off-the-field behavior and the troubling allegations and whether or not he was worried that the wide receiver may create further problems within the organization.

Arians went on to explain that Brown is a ‘model citizen.’

“Really none. He’s been a model citizen. If and when he’s not, we’ll move on. He knows that, our team knows that. I don’t really think we’re going to have any problems. We haven’t had any so far and I wouldn’t really anticipate any,” Arians said on SiriusXM NFL Radio.

Bruce Arians tells us that despite the latest incident with Antonio Brown, the wide receiver is in good standing with the team…

"He's been a model citizen, if and when he's not, we'll move on" #GoBucs

The Bucs did release a statement about the report emphasizing that the incident happened prior to Brown signing with the team.

The HOA president told the police that she wasn’t going to press charges against the NFL wide receiver because she feared Brown would retaliate against her employees.

Brown’s eight-game suspension for the start of the season was a result of his no contest plea to burglary and battery charges from a January incident in Florida, as well as accusations that he sent intimidating texts to a woman who accused the receiver of making past unwanted advances toward her.