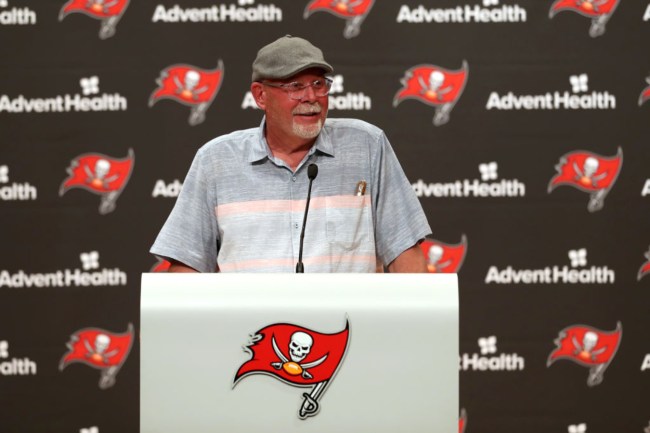 Bruce Arians addressed the media on Thursday confirming reports that he would be retiring from coaching and taking a front-office role with the Buccaneers.

At the end of his presser, Arians thanked the media but specifically called out reporter Mike Florio before stepping away from the podium.

As soon as Arians took his parting shot at the creator Pro Football Talk, the entire room erupted with laughter.

“One other thing, it’s been great working with you guys in the press, you’ve been fantastic all over the country” Arians stated. “Alright, Florio, you can write what you want, it’s ok.”

“Florio, you can write what you want. It's OK” – Bruce Arians

Florio was adamant that Brady wanted to play for the San Francisco 49ers. He also called out Arians after he said the team wouldn’t let Brady out of his contract in order for him to play elsewhere. Florio was also among the many reporters who suggested there was friction between Brady and Arians.

Brady of course came out of retirement and is set to be Tampa Bay’s starting quarterback this season. He was also sitting front row at Arians’ press conference, for what it’s worth.

Hopefully, Florio doesn’t receive too many mean text messages after Arians called him out. If he does, he’ll be sure to let us know all about them.