Bruce Arians, Like The Rest Of Us, Sounds Fed Up With The NFL’s Taunting Rules 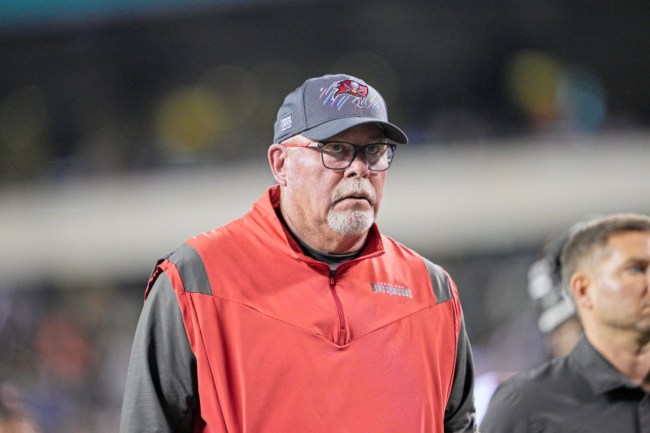 Technically, the NFL’s new controversial taunting rule isn’t new at all, it’s just that referees are actually enforcing it this season. That doesn’t mean you, me, players, and coaches have to like it, though.

Most level-headed people can agree that officials cleaning up the extracurriculars out on the field is fine, it’s just every single week we’re seeing flags being thrown for taunting when the ‘taunting’ at hand is questionable, at best. Ever since the absurd taunting call during the Cols-Panthers preseason game things have only gone downhill it seems.

Tampa Bay head coach Bruce Arians is sick of it just like the rest of us.

Bruce Arians Not A Fan Of The NFL’s Taunting Rules

Arians is someone who speaks his mind whenever he’s in front of a mic, which most can appreciate. So, when asked about the taunting rules and whether or not coaches have to remind players about it, Arians told it like it is.

“There’s no doubt (we have to remind players),” Arians told Jonathan Jones of CBS Sports. “Yeah, every week you give a scouting report on who’s calling the game and how they call it. But, yeah, with the new [emphasis], you can’t look to the other bench. That’s another new one so we talked about that today. Pretty soon you just tape your mouth shut and play.”

Arians talking about players not being allowed to look at the other team’s bench is a reference to Bears defender Cassius Marsh being penalized during this week’s Monday night game against the Steelers.

Marsh was called for taunting after looking at the Steelers’ sideline and the referee, Tony Corrente, appeared to intentionally hip-check Marsh as he grabbed the flag from his belt.