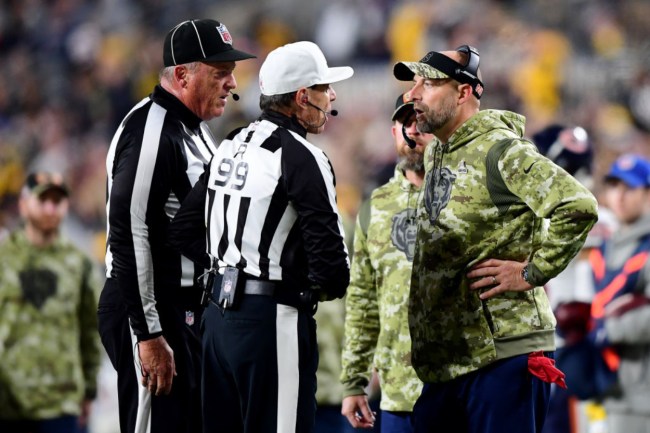 The NFL’s new taunting rules have been a talking point every single week of the season. While the majority of fans and players despise the new rules, the NFL is standing firm in its efforts to ‘clean up the game.’ A referee tossing a flag for taunting was yet again a major takeaway on Monday night during the Bears-Steelers matchup.

And to absolutely no surprise, the league is fully backing the official, Tony Corrente, and not the player.

During the fourth quarter of the Monday Night Football matchup, Chicago’s Cassius Marsh was penalized for staring at Pittsburgh’s sideline while perhaps saying a few words.

This was just called taunting. The officiating in the NFL continues to be a disaster. This entire game has been pathetic. pic.twitter.com/08UgyGyhJC

Things got even more bizarre when Marsh ran toward his own team’s sideline as Corrente appeared to hip-check him while putting out the flag to call the taunting penalty. Corrente was clearly excited to toss the flag as you can see him hold his hand up as if he just hit a game-winner, as Will Brinson of CBS Sports pointed out.

To say the taunting call was controversial is putting things lightly, but nevertheless, the NFL is sticking with it.

According to Mark Maske of The Washington Post, the NFL “fully backs” the taunting call on Marsh.

The NFL fully backs the taunting call made Monday night against the Browns' Cassius Marsh, source says: "The call was the definition of taunting, with the player gesturing toward the sideline and opponent."

After the game, Marsh did not hold back in calling out the official.

“I got hip-checked by the ref and it’s pretty clear. If I were to do that to a ref or even touch the ref, we’d get kicked out of the game and possibly suspended or fined… I just think that was incredibly inappropriate,” Marsh explained.

NFL fans were quick to call out the league for sticking by the taunting call:

This league is dumber than I ever imagined

They have the best sport in the country and they continue to want to ruin it https://t.co/aqlduf2Ohr

Put the NFL in rice https://t.co/LBi49IsHzm

Nobody cares that it was the “definition of taunting,” we’re saying your definition taunting is infantile and not good for the game.

Refs are out there getting emotional throwing flags in the heat of the moment but the actual people we pay to watch entertain us don’t get to be? https://t.co/yW3iTc7Thk