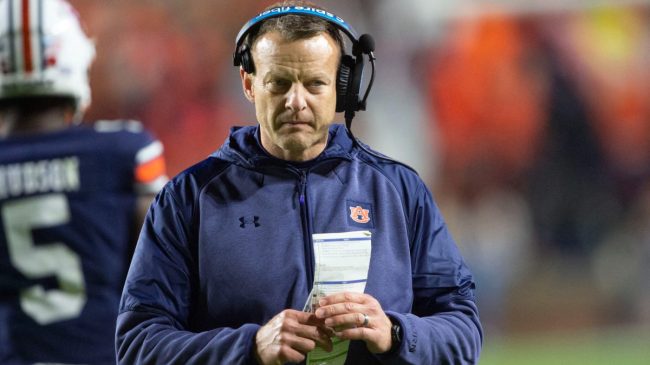 Bryan Harsin is set to begin year two with the Auburn Tigers in 2022. The head coach will look to build on last season where he led the Tigers to a bowl game appearance.

Unfortunately, it wasn’t a season that lived up to Auburn’s lofty expectations. The team lost five straight games to end the year, including dropping games against non-ranked foes Mississippi State and South Carolina. After narrowly losing to Alabama in the regular season finale, the Tigers fell to Houston in the Birmingham Bowl.

While many could’ve let the 6-7 campaign slide in his inaugural season, Harsin then caused the university a ton of negative press after rumors began to swirl regarding his future at Auburn. Nothing came from those allegations, though there was a point in time where his job security was questioned.

Harsin survived the rocky start and seems eager to begin year two on the Plains. He recently found a way to get closer to the fanbase as he tries to mend the severed relationship with Tiger supporters.

Harsin created a podcast that gives an in-depth look at the program, as well as gives a “unique angle of untold stories and life lessons,” according to the university.

It’s called Huddle With Hars and the first episode dropped on Memorial Day.

While the podcast is a great and unique way to give fans perspective and make them feel more involved with the program, opposing fans will never miss an opportunity to take digs at their rivals. It’s what makes college football entertaining.

With Auburn struggling in Harsin’s first season, those rivals trolled the head coach on social media.

On the second episode will we be learning how to blow three straight ten point leads?

Can you get us an episode to teach us how to coach your offense to 2nd half shutouts? Or blow double digit leads?

It will be canceled after the Georgia game when Finley puts up a total of 18 yards.

Despite the negative commentary from some followers, the first episode was wildly popular. In fact, it looks like it was one of the most listened to segments in football podcasts.

Still, nothing will change if he can’t improve his production on the field.

Should be focused on not going 6-7 instead of podcast

We’ll see how Harsin is able to do in year two with the Tigers. If Auburn gets back on track in the win column, you can bet the podcast will pick up even more steam. If not, fans will undoubtedly turn.