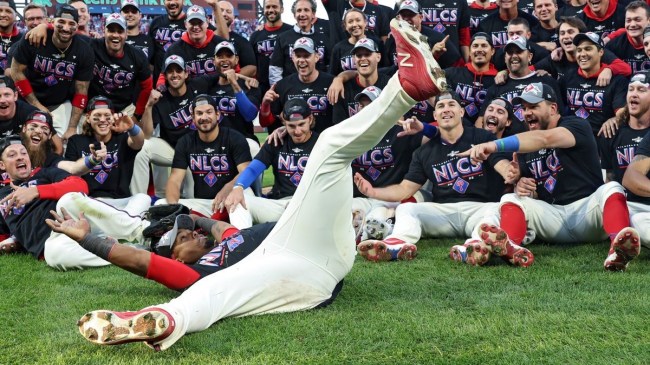 The vibes in Philadelphia are immaculate these days.

The Philadelphia 76ers begin the new NBA season as one of the favorites to win a championship. The Flyers are off a shocking 2-0-0 start to the NHL season. The Eagles are the only remaining undefeated team in the NFL, and the Phillies just ousted NL East rival Atlanta in the NLDS to reach the National League Championship Series.

It’s safe to say that everybody, both fans and athletes, are feeling pretty good about the state of sports in Philadelphia right now.

Perhaps nobody is loving the vibes more than Philadelphia Phillies star and reigning National League MVP Bryce Harper. Harper signed a 13-year, $3330 million deal with Philly in 2019 and has taken his game to yet another level in recent years.

Harper missed a number of games this season with an elbow injury and a broken thumb. But he returned not long before the playoffs and went 8-of-16 with two home runs and five RBIs in four games against the Braves,

So rather than keep the celebrations to himself, Harper and some teammates decided they would hop on over to a local bar and celebrate with fans.

Harper and teammates Brandon Marsh and Garrett Stubbs popped across the street to Xfinity Live on Saturday night to party with hundreds of waiting Phillies fans.

The complex is just about 50 yards away from Citizens Bank Park. It houses a number of different bars as well as a second-floor VIP area, which is where they were seated.

The players are now at xfinity live pic.twitter.com/ckGmEIXPjy

Harper, Stubbs, Marsh the boys have come to party!!! pic.twitter.com/zAM7JW5XF5

Suffice to say that Phillies fans were fired up to see their conquering heroes blowing off some steam and sharing in the celebrations.

Bryce Harper and the Phillies are partying at Xfinity Live pic.twitter.com/2ktwNv4c3V

The Phillies went to xfinity after getting trashed in the locker room, what a mood

THE PHILLIES ARE AT XFINITY LIVE NO WAY

These Phillies going to xfinity live on a Saturday night is the most on brand thing they could do.

Xfinity Live, much like this Phillies team, may not be the prettiest. It may not be the talk of the town. But it always gets the job done in the end.

Plus, maybe we’ll get a video of Bryce Harper on a mechanical bull.