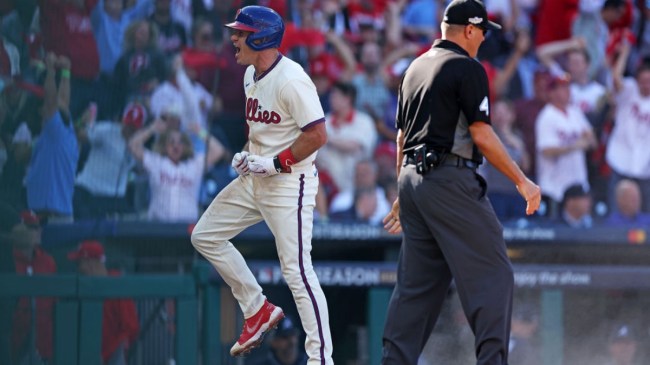 The Philadelphia Phillies have been on an absolute roll to start the playoffs. They dispatched the St Louis Cardinals in just 2 games in the Wild Card round despite both games occurring in St Louis.

Their National League Divisional Series matchup has been going pretty well for them too. In Game 1, they survived a late rally from the Braves to win in Atlanta. Game 2 saw the Braves fire back with a 3-0 win to even the series.

Game 3 saw the Phillies once again pull ahead in the series, winning emphatically by a score of 9-1.

That put them in position to have chance to eliminate the defending champs in Game 4.

They’ve been taking advantage of that opportunity. They got a 3-run home run from Brandon Marsh in the 2nd inning to take an early lead. The Braves got a run of their own in the 3rd inning on an Orlando Arcia homer.

Then the Phillies pushed their lead back to 3 runs on a wild play.

JT Realmuto drove a ball deep to center field and Michael Harris II ran after it. He didn’t get to it in time and the ball hit the wall, bouncing past him in the opposite direction. Meanwhile, Realmuto was hustling around the bases.

Harris recovered and tried to throw Realmuto out, but the catcher was able to be a the throw for the inside-the-park home run.

The home run was the first of its kind by a catcher in the playoffs.

The 1st ever in the postseason by a catcher

Just the 3rd by anyone in the last 93 years. The others:

The Philadelphia Phillies have added a few more runs since and just need their bullpen to hold on for them to be able to send the defending champs home early.