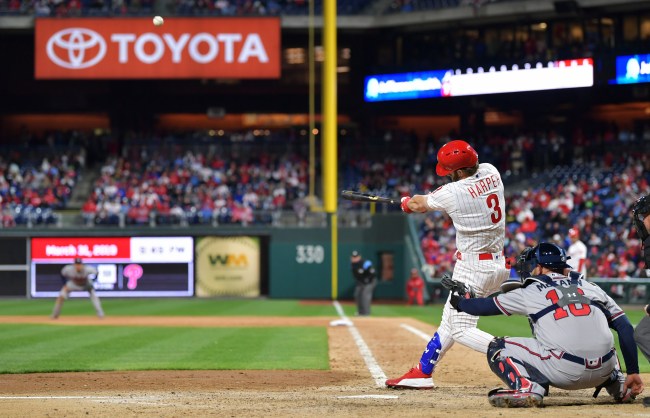 Bryce Harper put a dagger into Nationals fans hearts when he hit a moonshot home run in his return to Washington as a member of the Philadelphia Phillies on Tuesday, topped off with an epic bat flip.

Not that the fans didn’t deserve it. On Tuesday, prior to the game, Harper posted a heartfelt message to Nationals fans, expressing his gratitude to the team and city, and then was proceeded to be roundly booed when he came to bat in the game.

Bryce Harper was greeted by a chorus of boos in his return to D.C. on #MLBNShowcase. pic.twitter.com/bxYPngzhPI

Like a single one of those people would have turned down the opportunity to make $330 million. But I digress.

After striking out in his first two at-bats against Washington’s ace Max Scherzer, much to the delight of Nats fans, Harper reeled off a double, an RBI single, and then added the cherry on top crushing a huge two-run homer in the top of the eighth.

Then, just to stick it Nationals fans even more, BHarp unleashed a bat flip for the ages.

You asked for it. You got it.

That little bit of showmanship had fans asking, “Best bat flip ever?”

I heard the boos,” Harper said after the game, “and just remembered that I had 45,000 people and more in the city of Philadelphia that were screaming at their TVs cheering.”

As if that homer and the Philadelphia winning the game 8-2 wasn’t bad enough, Phillies fans, as they are wont to do, they poured salt into the wounds of Nats fans by loudly chanting, “WE GOT HARPER!” and calling Nationals Park “Citizens Bank South.”

Talk about adding insult to injury.

The chant? “WE GOT HARPER!”pic.twitter.com/ESeIJugqpb