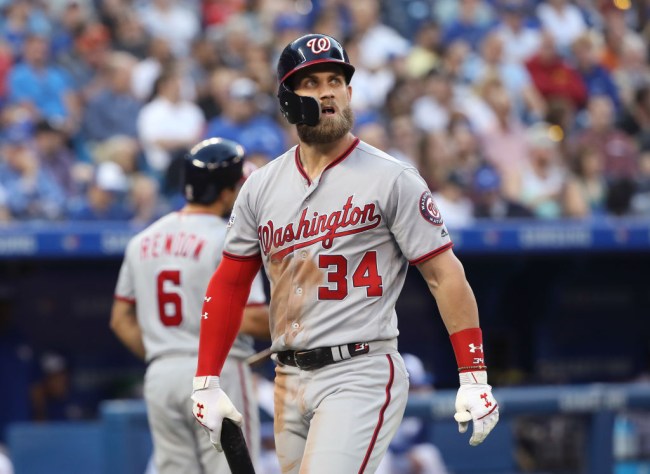 Washington Nationals superstar outfielder Bryce Harper is struggling this season and may be looking for a way to turn things around before it costs him a shitload of money. Harper, who is set to a get a huge payday this offseason, may be playing himself out of a $400 million contract by batting .217 this season. Today, the Nats slugger showed up to the field against the New York Yankees completely clean-shaven and looked nearly unrecognizable when he went up to bat.

Of course many Twitter conspiracy theorists believe Harper is making himself presentable for the NY Yankees, who have a strict no-facial hair policy.

Letting the yankees know how he is gonna look in pinstripes

Telling the Yankees that he is willing to have no facial hair to sign with the Yankees. Let's gooooo

First step towards signing with the Yankees…

Getting ready to don the pinstripes

Please take him. He can strikeout for you instead of us eating our entire salary cap 😂

Unfortunately Harper immediately struck out in his clean-shaven debut today against the Yanks. Hopefully Bryce can turn it around soon but at least the Nats have Juan Soto on the roster because he’s absolutely killing it right now.