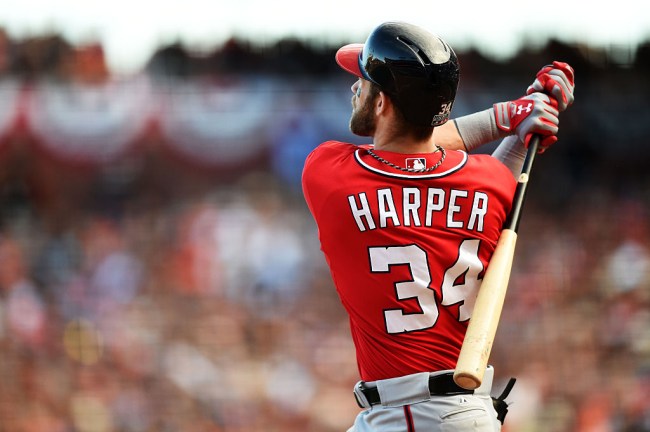 MLB teams were clawing to get Bryce Harper during the hot and heavy negotiations during the offseason. There were many factors including of course money, how many years, and quality of the current and future roster. One often overlooked factor also played a major role in deciding which team won the Bryce Harper sweepstakes — state taxes.

The Los Angeles Dodgers and San Francisco Giants were finalists in the hunt to get Bryce Harper. However, the slugging outfielder decided on the Philadelphia Phillies partly because Pennsylvania has much lower taxes than California. Harper’s agent, Scott Boras, appeared on San Francisco sports talk radio station KNBR on Thursday morning and explained how California’s exorbitant taxes helped Bryce stay on the East Coast.

“In a negotiation you try to put forth what Bryce’s needs and wants were, and certainly the Giants took some great steps to look at that,” Boras said in the radio interview. “It’s difficult for a California team because of the tax issues when you’re doing valuations and you’re in competition with a team that has much more valued tax elements. There are economics involved.”

In the end, Harper signed a record-breaking 13-year, $330 million deal with the Phillies. The Giants offered Harper $310 million over 12 years and the Dodgers reportedly offered a four-year contract worth $45 million per year. But both California teams would have had to offer much more to compensate for the higher taxes.

I’m told Giants made a 12-year, $310 million offer to Bryce Harper. They were willing to go higher but would have had to go well over $330 million to get it done because of California taxes.

California has the highest state personal income tax rate in the nation, which tops out at 13.3 percent. Meanwhile, Pennsylvania has a flat rate of 3.07 percent. This makes a huge difference when you’re negotiating the biggest free-agent contract in the history of North American sports.

“With a contract of that magnitude, it’s dramatic. It could be almost a full year’s compensation,” Boras added. “The Giants, Dodgers and Padres are in the worst state income tax jurisdiction in all of baseball. Players really get hit.”

According to Reason, San Francisco would have had to offer Harper $340 million over 10 years to make the money equal to the Phillies’ offer.

.⁦@theaceofspaeder⁩ a look at the taxes #MLB players will pay as they travel around the league pic.twitter.com/s5Td4ZQktA

Boras did acknowledge that San Francisco is a great franchise. “The Giants are one of the best franchises in baseball,” Boras said. “I think players are aware of that and because of that they get opportunities to get players like Bryce Harper to listen to them.”

Boras also shot down the rumors that Harper didn’t want to sign with the Giants because of their vast pitcher-friendly park. Boras said his team did a study and found that Harper would hit more home runs at Oracle Park than he did at Nationals Park. Harper’s strength was hitting to left-center field. Dodgers Stadium is also a pitcher’s park whereas Citizens Bank is a bandbox.

Now that Harper is with the Phillies, he’ll have to think about where he wants to live in the area because there are city taxes to consider. If Bryce decides to make Philadelphia his primary residence during his contract, he’ll pay $12.6 million over the 13 years in Philly’s wage tax, which is one of the highest in the country. But if Harper makes his home outside of Philly, then he’ll only pay the wage tax on days he is working in the city, so that would mean home games. So if he lives outside of The City of Brotherly Love, he’ll pay only $5.1 million in Philadelphia wage taxes in the next 13 years.

Of the $330 million, Harper will only receive $184 million after paying federal, state, and local taxes. And you thought your taxes were high.